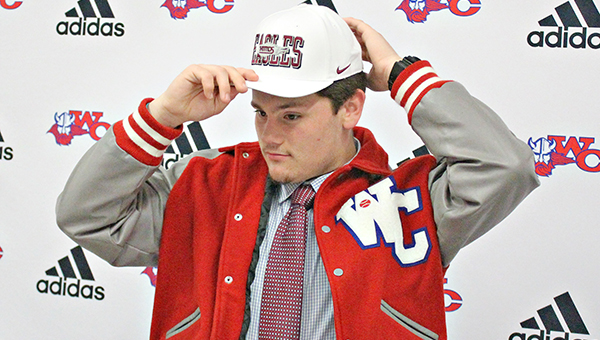 A couple of weeks ago, Mayson Shealy was on his way to buy some fishing gear when he got an urgent call from Warren Central baseball coach Randy Broome.

The senior pitcher rushed to the team’s fieldhouse and was greeted with news he’d been waiting years to hear — he was going to get a chance to play college baseball.

“I walked in and he handed me the paper. I just remember this rush. He gave me a big hug,” Shealy said. “It was a great accomplishment. It made me feel, in a sense, successful. It hit me that it’s real, and not just the phone conversations you have with a coach or anything else like that.”

Shealy signed with Hinds Community College on the spot, and on Thursday he, his family and coaches celebrated with a more formal ceremony in Warren Central’s football fieldhouse.

He’ll follow his older brother Grayson, who played at Hinds in 2019 and 2020. Mayson Shealy laughed when he was asked if anyone else had recruited him.

“I’m not too sure. I didn’t really care,” he said. “I didn’t plan on going anywhere else.”

Mayson’s desire to go to Hinds stems from not only a family lineage at the school and its proximity to Vicksburg, but also its status as a perennial top 20 program in the National Junior College Athletic Association national rankings.

“Most of my family has gone there, too, and it’s close to home. And the program is just amazing. Just their structure, I felt, is best for me,” he said.

Shealy has modest velocity — his fastball tops out around 86 mph — but excellent control, Broome said. Shealy has pitched a team-high 29 innings for the Vikings this season, and has a 3.14 ERA with 33 strikeouts.

Because of a late birthday Shealy is younger than most of his classmates, which Broome said gives him plenty of potential to get stronger and add some velocity to his pitches.

“He’s got upside. Big kid, strong kid, competitor. When we put him on the mound we’ve got a chance,” Broome said. “He’s one of those guys, especially at the high school level, that’s not afraid to throw inside. He’s able to work fastballs and set things up. It’s a lot of fun when you’ve got a guy that can spot up when you’re calling pitches, to set hitters up and get outs.”

Shealy said he knows he’s got a lot of work ahead to make the leap from a solid high school pitcher to one that can compete in one of the best junior college leagues in the country. For now, though, he’s trying to celebrate the opportunity and enjoy the moment.

“It feels good. I’m glad I’m able to move on to the next level to work with one of the best coaches in the country,” Shealy said. “I thank all of my prior coaches since I was itty bitty, and my current coaches. I’m just really excited to go and play ball for an elite team.”