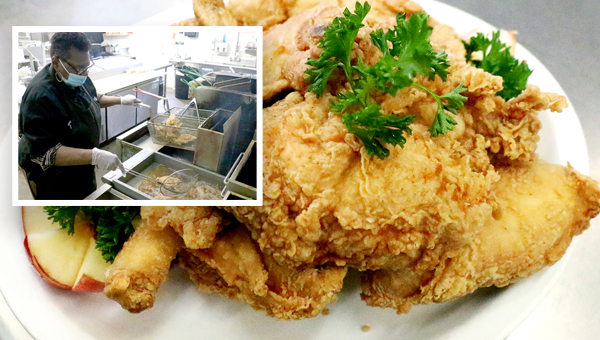 And then there are the fried chicken recipes that have been passed down for generations. It’s doubtful one would find a person in the South who doesn’t claim their grandmother’s fried chicken is the best.

Well, that may be so, but if granny isn’t at your house with her black iron skillet, the next best thing is the fried chicken served at Walnut Hills.

Clingan said when Ferris began serving fried chicken she only offered it on selected days, but now it is an entrée staple.

Touted on the menu as “world-famous award-winning Southern plantation fried chicken,” Walnut Hills’ fried chicken has garnered a number of awards including the Best Fried Chicken in the state by Mississippi Magazine and Delta Magazine.

Patrons, however, don’t have to depend on accolades from others to know where to find the best fried chicken. All they have to do is follow their nose, which will lead them to the round table restaurant.

So what is it about the fried chicken at Walnut Hills that has caught the attention of those handing out awards? Herdcine Williams, and the recipe she brought with her after working at the Old Southern Tea Room, an iconic restaurant that opened in 1941.

Williams has been at Walnut Hills for more than 30 years. Although she has a dedicated staff, Clingan said, Williams is the backbone of the restaurant’s kitchen.

Clingan even recalled a story about an out-of-towner that was so impressed with Williams’ cooking that he made her a job offer.

“I remember the gentleman from California came to Vicksburg and ate with us, and when he got back to California, he called Herdcine and wanted her to move there and open a fried chicken place,” Clingan said.

Lucky for Vicksburg, Williams was not interested in trekking across the country away from her hometown.

Because of its reputation and popularity, and because it just tastes so darn good, Clingan said, Walnut Hills uses “lots of chickens.”

But that was just about all she said about the restaurant’s secret recipe, other than they never used frozen chicken and that a “good oil,” not peanut oil, was used.

While these tips may get some culinary brains working, don’t get too excited. Clingan said the key component of the recipe is the batter.

“I think it’s the most important,” she said.

Like many who grew up in these parts, Clingan said, as a child she grew up eating fried chicken her mother cooked every Sunday.

“And my mother made the best,” she said.

Memories of gathering around a table with family and just waiting for the blessing to be said so the crunchy chicken leg eyed can be snatched off the serving platter onto your plate is one of the reasons Clingan thinks folks like eating fried chicken at Walnut Hills.

“When someone does order fried chicken and it is in this old house, it’s kind of like their grandmother’s, and it gives everyone a warm fuzzy feeling,” she said.