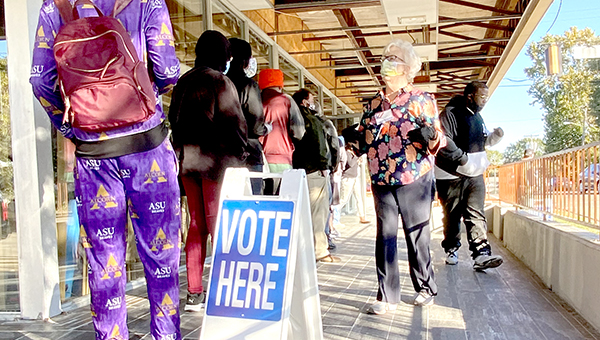 Rev. Beth Palmer, right, speaks with voters lined up outside the polling place at Serene on Drummond Street during November's general election. City officials have said COVID-19 protocols used during the general election in November will be used Tuesday during the city's Democratic Party primary. (Tim Reeves/The Vicksburg Post)

Mask up: COVID-19 measures in place for Tuesday’s party primary in Vicksburg

“We’re going to have the PPE (personal protection equipment), there’s still going to be 6-foot distancing at the precincts and it’s going to follow the same guidelines as the presidential elections,” Osborne said, adding that masks and facial coverings must be worn within the precincts.

Tuesday’s Democratic Party primary includes races for mayor, North Ward alderman and South Ward alderman. The polls are open from 7 a.m. to 7 p.m. The race is open to all registered voters in the city regardless of party affiliation.

Shawn Jackson, Troy Kimble and Willis Thompson are running for the Democratic nomination for mayor with the winner facing off against independent candidates Mayor George Flaggs Jr. and Daryl Hollingsworth in June.

Alfred Webb faces incumbent Alderman Michael Mayfield for North Ward alderman. The winner of the race will win the seat because there is no Republican or independent opposition ahead in June’s general election.

In the South Ward race, Vickie Bailey and Thomas “TJ” Mayfield are seeking the Democratic nomination for the office and will face incumbent Alderman Alex Monsour, a Republican who had no primary opposition. There are no independent candidates for the seat.