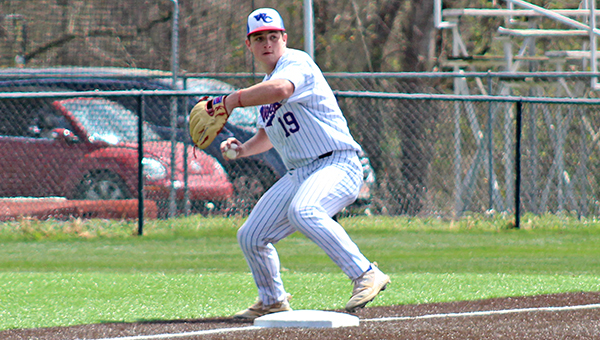 Showdown with nation’s No. 1 team is up next for Warren Central

Plenty of teams in Mississippi will see Madison Central on the schedule this season and get a growing sense of dread.

The Jaguars are undefeated (18-0) and ranked No. 1 in the country by MaxPreps.com. They’ve outscored their opponents 230-20 and are not only chasing the MHSAA Class 6A championship but perhaps a place in history as one of Mississippi’s greatest high school baseball teams ever.

Where others might see certain doom, however, Warren Central coach Randy Broome prefers to see opportunity. His Vikings are next in line to take their shot at mighty Madison Central, with three games on tap this week.

It’s an unavoidable showdown, Broome said, so the Vikings might as well make the most of it.

“Ric Flair always said, ‘To be the man you’ve got to beat the man.’ Well, you’ve got The Man coming,” Broome said with a laugh. “We don’t have anything to lose. Gosh dang, they’re No. 1 in the country. This is where memories are made. There’s an opportunity. Go in there and fight and see what happens.”

The Vikings and Jaguars will play Tuesday at 7 p.m. and Saturday at 2 p.m. at Warren Central, and Friday at 7 p.m. Madison Central. All three games count in the MHSAA Region 4-6A standings, so even one win would be a huge lift to Warren Central’s playoff hopes.

It won’t be that easy, though.

Madison Central has scored more than 20 runs three times this season — two of them against perennial Class 6A powers Oak Grove and Northwest Rankin — and has posted seven shutouts.
Broome said the Jaguars are a team without an obvious weakness.

“Last time we checked, they had three guys with 0.00 ERAs, 92-97 (mph), not an out in the lineup, I think the third baseman is hitting .550 or something stupid. They’ve been hammering folks,” Broome said. “At the end of the day we’ve got to worry about us, and I want them to go play the game and play the game right. As coaches, that’s all we can ask.”

Warren Central (4-13, 1-2 MHSAA Region 4-6A) has struggled this season, but is coming into this series on a high. It beat Clinton 3-2 on Friday to salvage the final game of the season series with one of its biggest baseball rivals.

Warren Central will still likely need to win its series against Murrah next week to secure a playoff berth, but Friday’s win provided a momentum boost and a reminder that in baseball anything can happen on a given day — an important thing to keep in mind when facing a challenge many in Mississippi might see as impossible.

“We so easily could have looked ahead. Easter break is this weekend, whatever, we could have easily come in with our tails tucked and said let’s go home in five (innings),” Randy Broome said after Friday’s win. “We didn’t, and maybe that shows a sign of us growing up a little bit. That’s a good thing.”