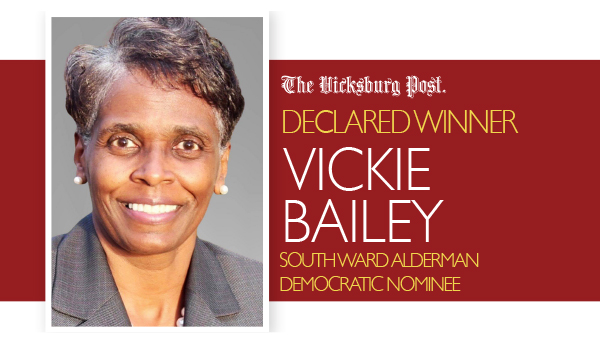 Vickie Bailey was out of breath as she commented moments after being declared the winner in Tuesday’s Democratic Party primary for South Ward alderman.

“It’s just the first half, we have got to get to the second half,” Bailey said as her campaign now turned its attention to June’s general election and a meeting with incumbent South Ward Alderman Alex Monsour. “I would not say we are surprised with the result but am surprised by the low turnout, the empathy voters have. We have to find a way to encourage them to come back. This is their community, our community.”

“I’d like to commend Mr. Mayfield. He ran a very good race,” Bailey said, adding she plans to reach out to Mayfield. “It is my hope that we can hopefully pool our resources to win in June.”

Mayfield said he wished Bailey the best of luck in moving forward and said she “ran a hard campaign.”

“I am sad at the results, but not the effort,” Mayfield said. “This is not the last time my name will be heard. I have to go back to the drawing board and see what the future holds. I still am going to work to better my community.”

Bailey said the general election campaign will begin in earnest this weekend.

“We cannot take a day off,” Bailey said. “We will hit the pavement again Saturday.”