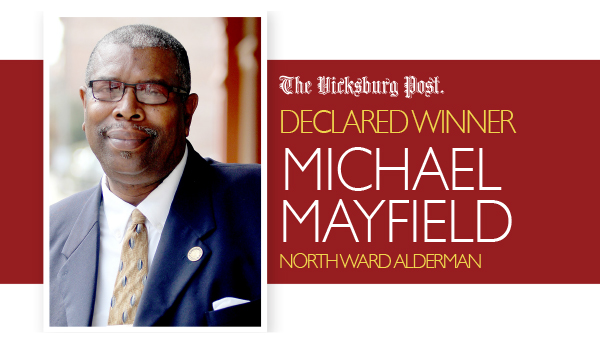 rom the first reported precinct, there was little doubt that incumbent North Ward Alderman Michael Mayfield would earn re-election, earning a fifth term on the city’s Board of Mayor and Aldermen.

During the Democratic Party primary Tuesday, Mayfield defeated challenger Alfred Webb 833-334, sweeping each of the six precincts that are included in the North Ward.

Even though Tuesday’s race was declared a primary, it is the final challenge for Mayfield since there is not a Republican or independent awaiting him on June’s general election ballot.

After the final results were announced, Mayfield thanked those who supported him.

“It goes without saying it is a great feeling and I am honored and blessed the North Ward has chosen me to represent them,” Mayfield said.

This is Mayfield’s eighth time to run for election and his eighth victory. The first three races were for the Warren County Board of Supervisors, where Mayfield represented District 2.

Webb said he appreciated the opportunity to run.

“It was good to try something new,” Webb, an accountant at Ameristar Casino, said. “I want to congratulate my opponent and hope he continues to be successful.”