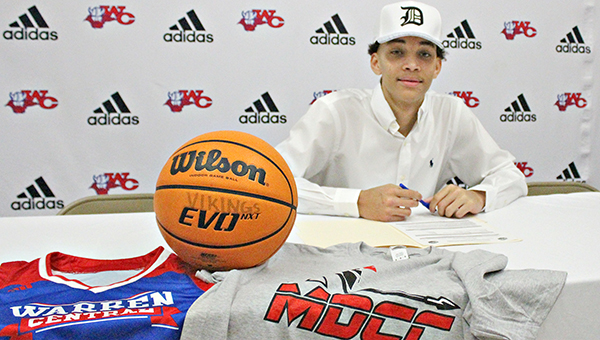 As his senior season at Warren Central wore on, Del’Jayvien Harried was growing increasingly concerned.

He was having a great individual season, but the attention from college coaches had slowed considerably. It might have been a natural lull in the recruiting cycle as teams reached the heart of their season, but it was no less troublesome for a player who had nothing to do but sit and wait for a call.

“I was really down on myself,” Harried said. “But after the season I had just gone to the gym and I was working harder than ever and preparing, because I knew I was going somewhere. I knew I had the talent to play. It was just being patient, that’s all. Just waiting for my time.”

Eventually, Harried’s time did come and he was rewarded handsomely for his patience. The 6-foot-2 guard signed a scholarship offer from Mississippi Delta Community College two weeks ago, and on Thursday he celebrated with family, coaches and teammates with a formal ceremony in Warren Central’s football fieldhouse.

“Since I was little I always wanted to play college ball. I always used to tell my dad and my mom that’s what I wanted to do,” Harried said. “I want to go far with basketball, and not just college. I want to go far. I really love the game. (MDCC coach Derrick) Fears believed in me and gave me the opportunity.”

Harried earned the opportunity through not only hard work, but adapting to a variety of different situations and roles during his time at Warren Central.

He broke into the lineup as a key reserve as a sophomore, and then averaged 7.8 points and 3.3 rebounds per game as a junior. He doubled his scoring output to 15.1 points per game this season, along with 4.1 rebounds, 1.4 steals and 1.2 assists while becoming more of a leader on a young team.
Warren Central only won two games this season, but Harried said he learned a lot from the adversity.

“You can’t get down on yourself. You just take it day by day,” he said. “Having a young team, you have to be vocal. Last year (Jabari Bowman) and Daniel (Smothers) were leading the team and I was just playing my role. This year was kind of new to me so I had to step up.”

WC coach Bruce Robinson praised the work and effort Harried has put in during his high school career.

“If hard work paid off was a person, that’s D.J. Harried,” Robinson said. “He’s always worked hard. He’s always been positive, and he’s been a good part of our basketball program. We’re so proud to have him sign a scholarship.”

Harried will get another leadership test when he arrives in Moorhead and starts working with his new teammates. Harried played shooting guard this season, but said Fears plans to use him at point guard at the college level.

“I feel like I can come up there and be a leader as a freshman, because I led a young team this year, too. Get everybody involved and also score.” Harried said. “He told me he wanted me on the ball because he likes tall guards. He told me I can earn a starting spot as long as I work for it.”