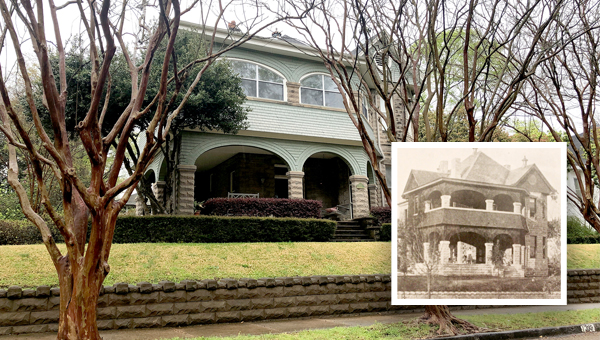 Hollow block construction became so popular that they were added to existing buildings, either as accents during a renovation or as a veneer to frame buildings.

The Lum House at 1333 Chambers Street was one such building. In January 1898, the city of Vicksburg was petitioned by those who owned lots in the area that is now Chambers Street to open up and grade the street. Shortly thereafter, J.J. Lum announced he would build a large frame two-story residence at once and, in fact, ground was broken on April 2, 1898.

Joseph John Lum was born on June 7, 1861, and died on April Fool’s Day in 1927 and was a cotton factor. He and his wife, Delia (1864-1942), were very involved in the Vicksburg community, opening their home for church and association events, including the United Daughters of the Confederacy.

J.J. Lum was injured in the wreck of the streetcar on Dec. 14, 1909, on Cherry Street when the conductor lost brakes and ran into a locomotive that was crossing Cherry Street, before the viaduct was constructed, heading for the Holly Street Station.

The Lum family moved out of this home in the spring of 1912 and relocated to their country home.

Handsel G. Blanks and his wife, Ethel, were set to move into the house and plumbing work was being done prior. On July 24, 1912, only days before they were to move in, fire broke out, at 10:30 p.m.

According to The Vicksburg Post, “the flames had reached good headway, but were promptly checked when the fire department under Chief Joe Wilks reached the scene.”

It is assumed that the renovations required because of the fire lead to the use of the concrete blocks that are seen today because the building is depicted as a masonry building on the 1913 Sanborn Map.

H.B. Blanks owned a lumber company and a levee construction company. In 1924, he was the manager of the National Park Cigar Stand and the proprietor of Jones Smoke House and the family had moved to South Street.

In 1929, the house was home to Anita Cowan, widow of Percy Cowan. By 1935, Dr. Hugh Johnston and his family were in residence here and Hazel Johnston lived here into the 1990s. The house continues to add beauty to Chambers Street today.