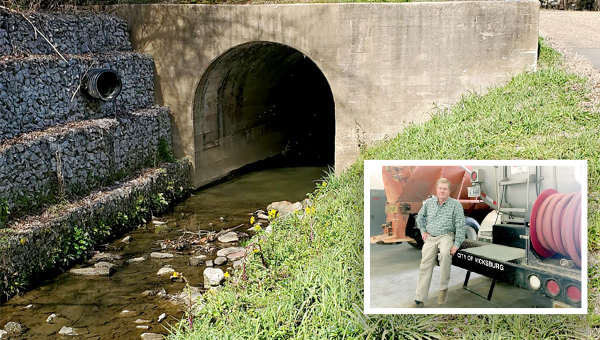 There’s a tunnel that runs under Vicksburg to the Mississippi River.

No one knows exactly when it was built, but the best estimates put its construction at some time after the Civil War.

“The sanitary sewer and stormwater went in it,” Public Works Director Garnet  Van Norman said. “It starts at Veto Street where it is a 4-foot tunnel. When you get to Rusty’s it’s about a 15-foot tunnel. It turns there and goes into the river right behind the boat (the MV Mississippi) at the river museum.

“It’s got a flat bottom, made of brick and the storm drain that went into it are brick,” he said. “Now we have that and every street that goes down to the river has got a storm drain going into the river. Most of (the water) removed from Washington Street into town goes into the tunnel.”

The tunnel, which at one time was the terminus for a network of storm drain tunnels removing runoff from different areas of the city, is the oldest city public works facility in the city. Most of Vicksburg’s water and sewer lines are more than 100 years old.

“We’ve got some of the oldest water pipes there is in the country,” Van Norman said. “It’s cast iron, lead joint. It still functions remarkably well. It’s all over town. At the time it was the top-of-the-line material.”

Most of the waterlines, he said, were installed when the city water plant, which was built in the late 1800s, was on Lee Street near where Ergon Marine is now.

“Back then, the city’s drinking water came from the river,” Van Norman said. “Now it comes from wells drilled into underground aquifers. It’s a lot better.”

The city’s new waterline is made of ductile iron, which is a stronger metal.

“We have leaks, but you’re going to have leaks anyway,” Van Norman said. “Cast iron is bad about splitting and breaking. You get any movement on the ground and it’s going to break; cast iron is very brittle.”

When the present water plant was built in the 1970s, Van Norman said, concrete cylinder pipe — a steel cylinder that is wire-wrapped with concrete on the outside — was used.

“All of that was brought into town and tied into the existing system at key points,” Van Norman said.

When the lines were installed, they intercepted the sewage going to the tunnel and took it to the river.

“It was all clay pipe and all of that went to the river; there was no treatment plant,” Van Norman said. “It was all gravity flow or pumped to the river. Back then, it was like that everywhere in the United States.”

Some of that clay pipe is still in the ground, Van Norman said, and still used to move sewage to the city’s wastewater treatment plant on Rifle Range Road, which was built in 1977. Plastic pipe is now used for sewer lines and to line the older clay pipes.

The city is in the process of assessing and upgrading its system.

“Clay pipe is still in the ground,” Van Norman said. “That’s where your problems are. Over the years, there’s been a lot of fill put over it. It’s cracked and if you can’t get a liner in it, you have to replace it and that’s expensive to do, and we’re finding all kinds of stuff with the sewer assessment.”