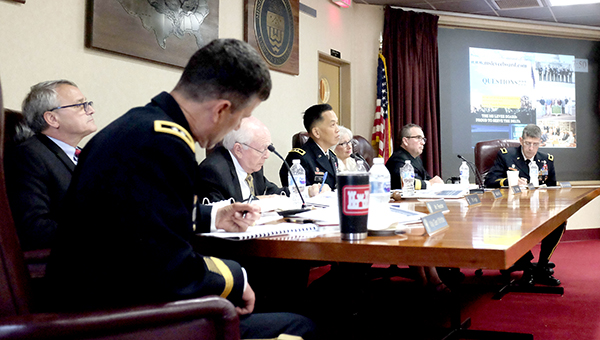 Members of the Mississippi River Commission hear testimony during a meeting Wednesday aboard M/V Mississippi while it was docked at the Vicksburg Riverfront in 2019. (Courtland Wells/The Vicksburg Post)

The Mississippi River Commission will hold a public meeting aboard the Motor Vessel Mississippi Wednesday from 1 to 4 p.m. at Vicksburg’s riverfront.

As part of its annual high-water inspection trip, the MRC will hear ideas, concerns and testimonies from stakeholders, local partners and residents.

Due to COVID-19 precautions, only pre-registered speakers will be permitted onboard the MV Mississippi. Social distancing measures will be in place and MRC members, along with staff and vessel crew, will undergo a health screening prior to the meeting. Speakers may be asked to complete a health screening and wear a face mask while onboard.

The meeting agenda is as follows:

“We’re looking forward to a constructive discussion that will allow all parties to share their thoughts for continuous improvement,” USACE Vicksburg District Commander Col. Robert Hilliard said. “The Mississippi River plays a monumental role in our nation’s commercial navigation and travel. Our goal is to ensure all surrounding and related projects are a collaborative effort between the district, local partners, stakeholders and members of the public.”

The Vicksburg meeting is the commission’s third stop of the inspection trip. Earlier meetings include stops in New Madrid, Mo. on April 12 and Beale Street Landing in Memphis, Tenn., on April 13. The schedule will conclude with a public meeting at Thalia Street Wharf in New Orleans on April 16.

Established in 1879, the Mississippi River Commission consists of seven members nominated by the President of the United States and vetted by the U.S. Senate. Three of the organization’s members are USACE officers; one member is from the National Oceanic and Atmospheric Administration; and three members are civilians, two of whom are civil engineers.

The MRC’s duties include recommending policy and work programs, studying and reporting on the necessity for modifications or additions to the flood control and navigation project and conducting semi-annual inspection trips. The MRC’s authority includes the entire length of the Mississippi River from its headwaters at Lake Itasca, Minn., to Head of Passes, La., where the river empties into the Gulf of Mexico.

The public hearing process is unique to the MRC and USACE. The meetings maintain a dialogue between watershed interests, the public and USACE. Following the oral presentations, a copy of the remarks is presented to the commission for official record and written response.

The benefits of hearing the issues and concerns firsthand through the public hearing process are invaluable. The interaction with congressional, federal and state interests, local boards and non-government organizations and the public is crucial to the decision-making process for the nation’s water resources.