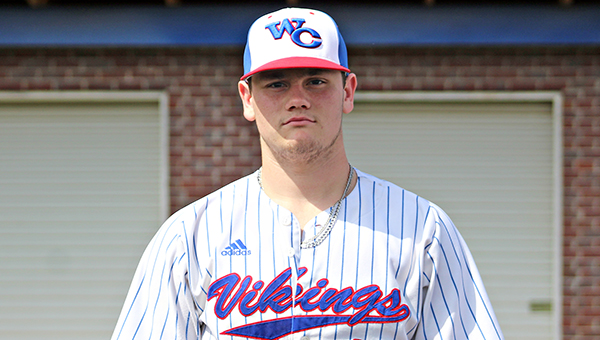 Warren Central pitcher Mayson Shealy had 12 strikeouts in an 11-1 win over Murrah on Tuesday. He also went 2-for-3 with four RBIs at the plate.

With losses in five of its first six region games, qualifying for the MHSAA Class 6A baseball playoffs was not a foregone conclusion for Warren Central.

The Vikings can probably breathe a little easier now, though.

Mayson Shealy racked up 12 strikeouts in a five-inning complete game, and also went 2-for-3 with four RBIs at the plate, to lead Warren Central to a crucial 11-1 victory over Murrah on Tuesday.

Shealy hit two doubles, including one in the second inning to bring in Warren Central’s first two runs. His second double, in the third inning, also plated two runs and made it 7-0.

Warren Central must still win one of its last two games against Murrah to clinch the third and final playoff berth from Region 4-6A. The teams will play Friday at 6 p.m. at Smith-Wills Stadium in Jackson, and Saturday at noon at Warren Central.

John David Gunn scattered six hits and allowed one run in a complete-game victory for Central Hinds. He walked three batters and struck out three.

St. Al’s only run came in the bottom of the third inning, when Cole Autrey singled and eventually scored on a squeeze bunt by Jake Brister to tie it at 1. Coumbe led off the top of the fourth with a double, moved to third on a bunt, and scored on a passed ball to give Central Hinds the lead for good.

St. Al and Central Hinds will play a doubleheader Friday in Raymond, beginning at 4 p.m. St. Al could still earn the No. 3 seed from District 3-4A for the MAIS Class 4A playoffs by sweeping that doubleheader and beating Park Place on Thursday.

The Class 4A playoffs begin next week.