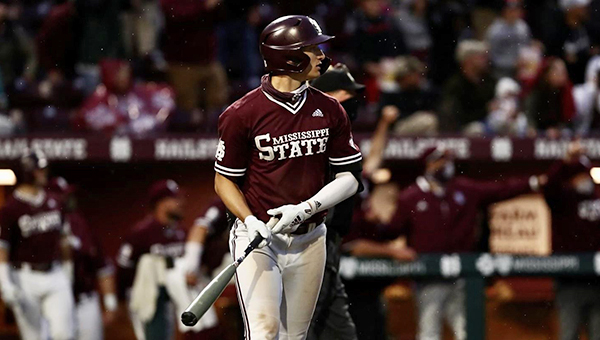 STARKVILLE — Ole Miss and Mississippi State reminded a crowd of more than 10,000 fans what they’ve been missing for the past year.

Kamren James drove in four runs, including two on sacrifice flies late in the game, while

Preston Johnson and Landon Sims combined to throw four innings of shutout relief to lead Mississippi State to a 5-2 victory over the Rebels in the opener of a three-game series Friday at Dudy Noble Field.

With 10,291 fans cheering wildly throughout, the game had the feel of a do-or-die super regional instead of a midseason Southeastern Conference game.

It was Mississippi State’s biggest home crowd of the season as COVID-19 restrictions gradually ease, and Bulldogs coach Chris Lemonis said the energy from the fans simply added to the excitement of a rivalry series between top-10 teams with College World Series aspirations.

“Those maroon-white chants in the eighth; we haven’t heard those in a long time, so it was nice to hear that. Even if you’re the opponent in this environment, it’s nice to feel like there’s some normalcy back and playing in front of these environments that we’re used to,” Lemonis said.

Ole Miss starter Gunnar Hoglund (3-2) had nine strikeouts in seven innings, but took the loss after giving up the go-ahead run in the bottom of the sixth inning. Tanner Allen hit a one-out triple and then scored on James’ fly ball to right field to put Mississippi State ahead 3-2.

The Bulldogs (26-7, 9-4 SEC) added two insurance runs in the eighth inning. A double by Scotty Dubrule and a single by Rowdey Jordan led to an RBI single by Allen and another sacrifice fly by James, making it 5-2.

James also hit an RBI single in the first inning and a solo home run in the fourth, and finished 2-for-2. He has multiple hits in four of his last five games, and is batting .526 (10-for-19) with three home runs and nine RBIs in that span.

“You’re watching him evolve as a hitter,” Lemonis said of James’ performance. “Not just from the power side but just everything. It’s just understanding what’s happening in the game, staying on pitches with a two-strike fight. He’s just doing a lot of everything. He’s been hot for a couple of weeks now. It’s nice to know when he walks up there you’re going to get a big swing out of him.”

Ole Miss’ Hayden Dunhurst led off the top of the ninth with a double, but was quickly erased on a line drive double play. Sims then struck out T.J. MCCants to end the game and earn his fourth save of the season.

“We know coming into this series there’s always a little more adrenaline, a little more pride playing against a home-state rival,” James said. “Any time Mississippi State is playing Ole Miss in any sport I’m watching. This is a series I circle on the calendar from the beginning of the year when we’re going to get to play them. It was fun tonight and I’m looking forward to the rest of the weekend.