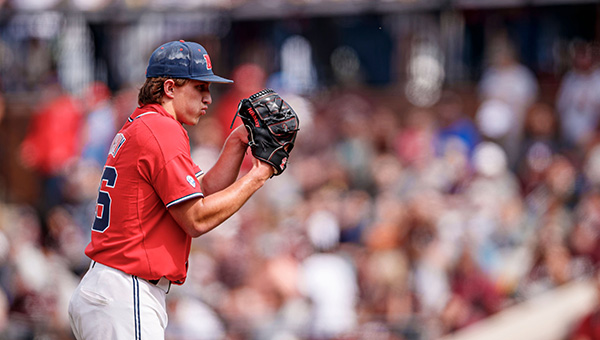 The junior left-hander struck out 12 batters in a complete-game, one-hit shutout to lead Ole Miss to a 9-0 rout of Mississippi State at Dudy Noble Field.

Nikhazy walked two batters, and the only hit he allowed was a one-out single by Brayland Skinner in the fifth inning. That broke up a string of 11 consecutive batters that he had retired, and he also set down the last 11 he faced.

Nikhazy was part of a combined no-hitter against Xavier in 2020, and wound up with Rebels’ first complete-game one-hitter since 2001. It was also Ole Miss’ first nine-inning complete game since 2014.

None of Mississippi State’s three baserunners got past first base.

“He’s really good. He’s pitched really good of late. He’s pitched this well his whole career. He’s one of the better arms in our league and in the country,” Mississippi State coach Chris Lemonis said. “They got him the lead and he took that lead and just jammed it down our throats all day long. He works a three-pitch mix and it was just really good. We never got on anything for the whole day.”

With Nikhazy in firm control, Mississippi State (26-8, 9-5 Southeastern Conference) would have had a tough time winning. With the way the Rebels hit the ball, the Bulldogs had no chance.

Ole Miss (26-9, 9-5) scored in each of the first five innings and totaled 17 hits. Eleven different players had a hit, eight scored a run and seven had an RBI. Every Ole Miss player that batted reached base at least once.

Hayden Leatherwood homered to start a three-run surge in the fourth inning that put Ole Miss ahead 6-0. Hayden Dunhurst finished with three hits and one RBI, while Jacob Gonzalez and Cael Baker drove in two runs apiece.

The Rebels and Bulldogs have split the first two games of their three-game series in Starkville. The finale is Sunday at 1 p.m.

“They’re going to have to respond tomorrow. We felt like a million bucks last night and they were pissed. Now we’re the ones that are pissed,” Lemonis said. “We have to get a good night’s sleep, get back and be ready to go. The sun comes up tomorrow. It’s a new day and we’ve got a chance to win a big ballgame against our rival. It’s going to be a heck of a game tomorrow, but we’ve got to come out and play better.”