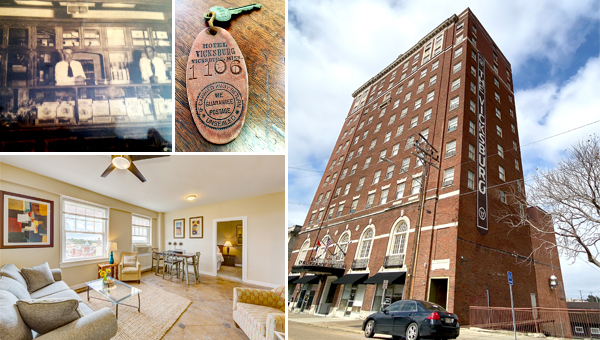 She was the “grande dame” of the city.

Standing taller than any other building between Memphis and New Orleans, at 11 stories and 149 feet, the Hotel Vicksburg — now known as The Vicksburg — was considered one of the most elaborate buildings in Vicksburg.

With her two-story marbled lobby and a fountain, where ornamental goldfish swam in the pool beneath, there were no doubt guests would have a memorable stay.

Built in 1928 by the Magnolia Hotel Company at a cost of $550,000, the Hotel Vicksburg began accepting guests July 4 the following year.

The exterior of the hotel is in the Colonial Revival style of architecture and its interior a combination of Art Deco and Colonial Revival with each room on the ground floor boasting a different motif.

Although built just before the stock market crashed, the Hotel Vicksburg thrived well into the ‘50s.

During its heyday, the hotel not only attracted visitors from across the country but locals who enjoyed the elaborate facility for business and social gatherings.

Radio station WQBC began broadcasting live from the 11th floor of the hotel in 1931, and its soundproof room was said to have been the only or perhaps first air-cooled room in Vicksburg.

William Hickman, who wrote a “Special to The Post” about the hotel, said, “A large tank resembling a hot water heater was filled daily with chopped ice. Small fans inside blew across the ice allowing cooled air to escape through vents in the tank.”

One of the most notable visitors to the Hotel Vicksburg was Army general and future U.S. President Dwight D. Eisenhower.

He had been invited to be part of Vicksburg’s Carnival of the Confederacy, which included a parade on July 4, 1947.

While Eisenhower was not an overnight guest at the hotel, following the parade Vicksburg Evening Post executive editor Charles Faulk wrote in one of his Sunday columns that Eisenhower had held a press conference in its Choral Room.

During the press conference, Eisenhower didn’t come right out and say he was going to run for president, Faulk wrote, but per the general’s comments, it was quite evident he would seek the highest office in the nation.

In 1978 the building was sold to Vicksburg native Joel Alexander and work began to convert the hotel into 54 residential apartments.

Leasing began in 1980 and, in addition to the apartments, the old hotel housed two restaurants.

In 1981, the property was purchased at a foreclosure sale by John Coats, with Trade Mark Homes, Inc. of New Orleans.

The hotel traded hands in 2005, but due to a loan default, the facility went back to Coats and George Mayer. Mayer and his wife, Caroline, had been hired to manage the property and as a thank you, Coats had given the couple 25 percent interest in the property.

Today, Beth McFarland is the owner of the Hotel Vicksburg.

McFarland is the daughter of the former John Coats Sr. After Mayer’s death, she said she bought out his 25 percent interest in the building.

McFarland has renovated 26 apartments, giving the facility a total of 60 apartments.

“Originally, the hotel had 203 rooms,” McFarland said, but now they have been reconfigured to provide efficiency, one- and two-bedroom apartments.

Although many of the original bathroom fixtures have been retained, McFarland said, updates have been made to include granite kitchen countertops and stainless appliances.

In 1979 the Hotel Vicksburg was placed on the National Register of Historic Places, and in keeping with the building’s history, McFarland said, “We’ve preserved the architectural features in the common areas, which include the cigar concession, an original mural, the art deco plaster reliefs, marble check-in counter, telephone booths, brass mailbox, and one of the art deco water fountains.”

Sadly, McFarland said many of the “other treasures” were auctioned off when the hotel closed in 1975.

“I have, however, collected quite a bit of ephemera along the way, including the original newspaper front page and feature on the opening of the hotel on July 4, 1929, matchboxes, letters and letterhead,” she said.