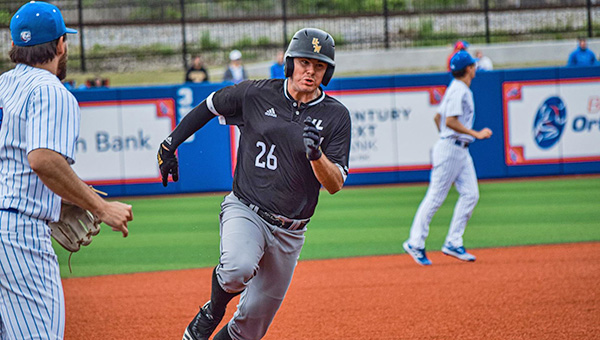 RUSTON, La. — Southern Miss drew first blood in its series with Louisiana Tech, but the Bulldogs didn’t take long to bite back.

A solo home run by Reed Trimble lifted Southern Miss to a 4-3 victory in game one of a doubleheader, before Louisiana Tech rallied for a 5-3 win in the nightcap Saturday.

Trimble led off the eighth inning with his eighth home run of the year to provide the winning run for Southern Miss (22-11, 9-4 Conference USA).

Christopher Sargent hit a two-run homer in the fourth inning, and Reece Ewing hit an RBI single in the sixth to put the Golden Eagles ahead 3-1.

RBI doubles by Hunter Wells and Manny Garcia in the bottom of the sixth tied it, however, until Trimble’s homer put USM ahead for good.

Ryan Och pitched 3 2/3 innings of scoreless relief to earn the win for Southern Miss. He allowed three hits and one walk, and struck out six.

In game two, Philip Matulia hit a two-run homer in the second inning to stake Louisiana Tech to an early lead, and it went on to win 5-3.

Ryan Jennings (3-2) struck out nine batters in 6 2/3 innings for the Bulldogs, and Landon Tompkins followed with 2 1/3 innings of scoreless relief to earn his fourth save of the season.

Taylor Young had two hits and scored two runs for Tech, and Garcia was 2-for-3 with one RBI and one run scored.

Danny Lynch was also 2-for-3 for Southern Miss, with two RBIs and two runs scored. Sargent had two hits as well, but Southern Miss only had six hits as a team.

The two teams will complete the series with another doubleheader Sunday, beginning at 1 p.m. Both games are scheduled for seven innings.