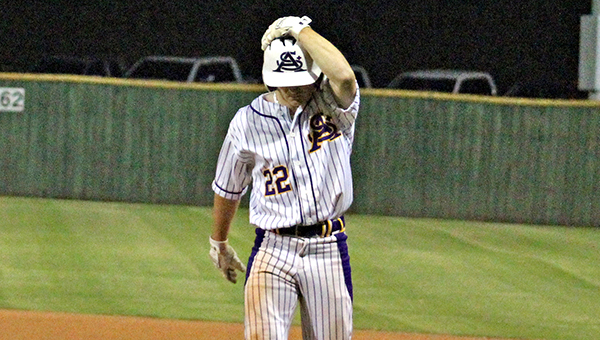 St. Aloysius' Adam Francisco puts his hand on his head after making an out in the fifth inning of Monday's playoff game against Brookhaven Academy. Brookhaven scored 14 runs in the top of the fifth and beat St. Al 15-5. (Ernest Bowker/The Vicksburg Post)

St. Aloysius was cruising along toward a relatively easy victory in its baseball playoff opener when it entered what seemed like a bad dream — or, more accurately, a suddenly recurring nightmare.

Trenton Tarver’s grand slam highlighted a fifth inning in which Brookhaven Academy batted around twice and scored 14 runs, and in the span of an inning turned a four-run deficit into a 15-5 run-rule victory over St. Al in Game 1 of an MAIS Class 4A playoff series at Bazinsky Field.

It was the second game in a row in which the Flashes lost a five-run lead when their opponent broke loose for a big inning. Central Hinds scored 10 runs in the fifth inning of a 13-8 win over the Flashes in the regular-season finale last Friday.

“Brookhaven is a really good team. You can’t slip up and give them those opportunities, because they’re going to capitalize. Every opportunity we gave them to capitalize, they did,”

St. Al coach Sid Naron said. “It’s really hard to stop. At some point you hope somebody steps up and stops the bleeding. It’s one of those things. It’s the fifth inning, you’re running along and it’s 5-1, and the next thing you know you’re just trying to find an out.”

Game 2 of the best-of-three series is Friday at 4:30 p.m. at Brookhaven. If St. Al (16-10) wins, Game 3 will follow immediately afterward. Brookhaven (16-7) only needs to win one of the two games to advance to the second rounda against either Simpson Academy or Oak Forest.

Even though Brookhaven’s big inning was the kind of thing most teams only experience once or twice a season, Naron said it was important to address its underlying causes on his team’s end.

St. Al scored in each of the first three innings Tuesday to build a 5-1 lead. Tristan Wilbanks hit an RBI triple and scored on a hit by Adam Francisco in the first inning, Wes Warnock hit an RBI single in the second, and in the third a run scored on a passed ball and a sacrifice fly by Cole Autrey.

Francisco, meanwhile, was cruising on the mound. He allowed five hits, but only one run in the first four innings. Naron said Francisco complained of some tightness in his arm, however, and was pulled before the fifth and replaced by Wilbanks.

Normally one of St. Al’s best pitchers, Wilbanks simply did not have his best stuff on Tuesday. He gave up a leadoff double to freshman Avery Griffin, struck out the next batter, and then had things completely unravel.

Wilbanks walked two batters and gave up back-to-back singles as Brookhaven pulled to within 5-4. An error on a bunt, a hit batter with the bases loaded, and a two-run single by Michael Watts gave Brookhaven a 7-4 lead — and the worst was yet to come.

After a strikeout, a sharp grounder went through Ben Raines’ legs at first base and allowed two more runs to score. Two more walks set things up for Tarver, who crushed a 1-0 pitch over the left field wall for a grand slam and a 13-5 lead.

“That put the icing on the cake. That finished them off. They laid down after that,” said Tarver, who finished the game 3-for-4 with six RBIs.

The Cougars tacked on two more runs after Tarver’s homer, on RBI doubles by Trevor Fortenberry and Easton Boyte, to make it 15-5. When it was all said and done, they had sent 18 batters to the plate, got seven hits, and scored eight of their 14 runs with two outs.

St. Al contributed to its own misery with three errors and four walks.

“(Wilbanks) did walk a couple of guys, but he made some good pitches and we didn’t make the routine plays. And then it snowballed from there,” Naron said. “They gave us opportunities to get out of that inning and it’s no fault but our own. At some point we have to stop the bleeding and we just weren’t able to do it.”

Seemingly shell-shocked, St. Al didn’t put up much of a fight in the bottom of the fifth inning. It was retired in order, with a game-ending lineout by Autrey the only real spark of life.

Instead, the Flashes will need a comeback on Friday when they try to win two games on the road, shake off their fifth-inning blues, and advance to the second round.

“We’ve proven that we can bounce back. You hope you don’t lose that game at home. That’s the really tough one, that first one,” Naron said. “It’s going to be difficult down there, but it’s definitely possible. I think we can do it. Our guys will have to play better than they did tonight, that’s for sure.”