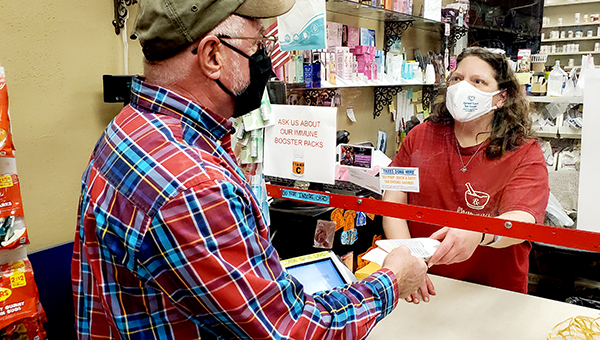 After 100 years, the tradition of service continues at Peoples Drug Store

When Wendy Trevilion bought Peoples Drug Store in 2017, she acquired more than a business, she acquired a legacy of service that continues as the store celebrates its 100th year in business.

The drug store founded by Joseph J. Gerache and Charles C. Kette began when they acquired Jones Drug Store in the lobby of the National Park Hotel in 1920, Trevilion said.

“In 1921, they renamed it Peoples Drug Store and that’s where we got our start,” she said. “It stayed inside the National Park Hotel for about 30 years.”

When the hotel was razed as part of urban renewal in the 1950s, she said, “They just moved the drug store across the street into this building (at the corner of Veto and Washington streets). It’s been in this location since the 1950s.

“There was a building right beside us where our parking lot is. That was demolished under urban renewal and the Geraches bought that lot and that’s how they got a parking lot,” Trevilion said.

During World War II, when there was a lack of men because of the draft and military enlistments, women were allowed to become pharmacists, “but were not required to go to school,” Trevilion said. “They became registered pharmacists.”

Gerache, who was on the state Board of Pharmacy at the time, had four children — three daughters and a son. He gave Peoples to two of his daughters, Rosalie Ford and Mercedes Reeder “and made Miss Rosalie a pharmacist. He gave her a registered license so she could run the business.”

In the 1960s, Trevilion said, John Bove started working for the Geraches as a pharmacist at Peoples and in the early 1970s bought Peoples from Reeder and  Ford.

“They still worked here when he owned it and taught him the business and made sure everything ran smooth,” she said. “He owned the store for over 40 years, but he worked here for 50 years. He left in June of 2017. That was his 50th anniversary.”

She added she still has his photo and other items in her office for inspiration.

Trevilion has been affiliated with Peoples Drug Store for 20 years starting as a pharmacy technician in 2001. At that time she said, Bove “took me under his wing like they (Ford and Reeder) took him under their wing; teaching me about the business.

“When he couldn’t work anymore he asked me if I wanted to buy the business,” she said. “At that time, I had reservations; I didn’t want to be the boss. But it was, ‘If I can get the loan, I guess it was meant to be. I applied for the loan, they approved it and God meant it to be.”

The change of owners has not affected Peoples tradition of customer service.

“We’re still running everything the same way the Geraches did,” Trevilion said. “Customers come first; we treat them like family and you’re just there for them. That’s what we try to do. We still offer free delivery.

“It’s one of those things that if it’s not broke don’t fix it and it helps our customers because sometimes you have a hard enough time paying for the medicine you don’t want to have to pay for the delivery, too.”

Having the tradition, Trevilion said, is the best part of the business.

“The best part is to be in that small homey feeling. You feel safe and secure because it’s still like family,” she said. “With all that tradition, just to know you can continue that and carry it on. To me, it’s like I’m trying to make them the (Geraches) proud and keep those traditions growing. It worked for so long we decided to keep it going.”

And that family tradition extends to the store’s employees.

“It’s been very nice to work here,” said Freddie Harris, who has worked at Peoples for more than 40 years. I was about 14-15 when I started working. I worked for Mr. Bove before he passed and he was a nice fellow; anything he could do for you, he would. Wendy is the same way. I’m glad to be part of it (the store’s tradition).”

Denise McCain has been with Peoples for 20 years, first working part-time while she was employed by the U.S. Army Corps of Engineers and then going full-time after she retired.

“My mother was the bookkeeper here and I came when I got off work,” she said. “They needed help in the diabetic shop so that’s where I started working three hours a day.

“It’s wonderful. The store was family-owned and run; this is really a nice place. The customers are nice; employees are nice. You get to know the customers and help them out.”

Trevilion said many people have recommended she modernize the store, “But I think having old family values in running a business like this kind of beats out the new technology. When you call you get a person; you don’t have to go through a menu. You have that personal touch.”

And it’s that personal touch, she said, that allows the store to continue to thrive.

“It’s a legacy and I don’t want to let anybody down,” Trevilion said. “This store has a family feel. We’re all family here and we take our time with the customers because our customers are our family, too, and some of them have been here longer than we’ve been here. You’ve got to take care of them.”