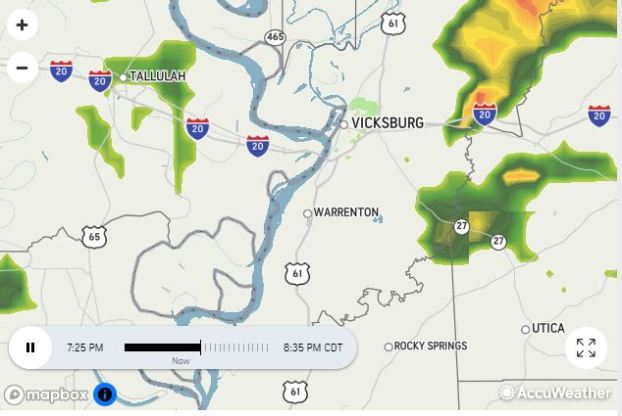 Warren County missed severe weather Sunday as tornadoes moved across the state of Mississippi late that afternoon and into the evening.

According to the National Weather Service in Jackson, outside of a few possible showers, Warren County should experience clear skies the rest of Sunday night and Monday. Meteorologists with the weather service cautioned that severe weather — including hail and gusty winds — is possible in Warren County on Tuesday.

Warren County was under a tornado watch for much of Sunday evening.

Early Sunday afternoon, two tornado warnings were issued in Warren County around the Eagle Lake community. Meteorologist Latrice Maxie said the initial warning went out at about 4:50 p.m. The warning ended at 6:30 p.m.

Another storm, however, struck Yazoo County not long after. Yazoo County Emergency Management Director Jack Willingham told media outlets that a tornado left a 25-mile track of damage, and several homes were damaged or destroyed.

A third tornado touched down in Hinds County just before 7 p.m. and caused a tornado warning for the South Jackson area and Rankin County before lifting.

Late Sunday evening, storms fired up in North Mississippi. A tornado emergency was declared for Tupelo just before 10 p.m., as a “large, extremely dangerous and potentially deadly tornado” was spotted on the ground over the city of Tupelo. The mayor’s office reported damage in the city.