Tate honored with fire truck dedicated in his name 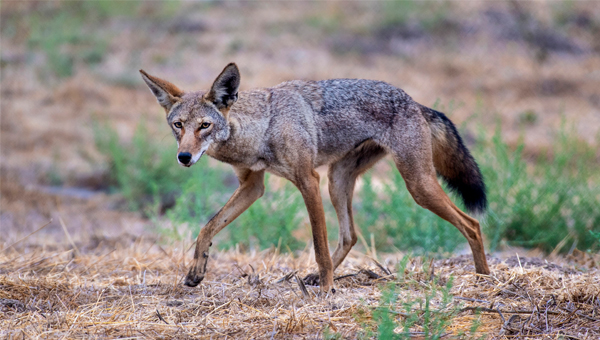 A Sunday morning walk in the Vicksburg National Military Park by Vicksburg resident Lesley Silver led to a close encounter with a coyote near Fort Hill.

She said the encounter took place in early March. She parked her car at the Fort Hill parking lot and was walking down the hill toward the park entrance when she noticed some movement to her left.

“I thought it was a deer but it wasn’t,” she said. “It was a coyote. He was 6 feet away from me and he had his eyes looking straight at my eyes.”

Her encounter is not the first time people have reported seeing coyotes in the park. And a recent sighting in the park has prompted the staff of the Vicksburg National Military Park to issue a warning asking those using the park to be on the lookout for coyotes.

“Over the weekend we had a coyote that was more active in the South Loop, and we wanted the runners to be aware of that when they’re in the South Loop,” said Brendan Wilson, chief of interpretation, education and partnership at the park. “It hasn’t attacked anybody.”

He said the park’s biologist indicated there will be more activity from coyotes this time of year and people need to keep an eye out for them.

“The coyote hasn’t had a sighting in a couple of days so it might have moved on,” Wilson said, adding that if people see a coyote they need to make noise.

“Make yourself big; that’s the type of thing that scares coyotes away,” he said. “This is the time of year when they may be active breeding, they might have pups or they might be getting food from a source close to people.”

Presently, Wilson said, the park staff is observing the coyotes in the park.

“We’ll see how the activity goes and then we’ll see what further steps need to be taken after that,” he said.

Silver said she stomped at the animal and yelled at it but it did not move.

“There was no stick, nothing around, so I took my purse off from around my neck and I started twirling it so there would be a barrier between his head and my body,” she said.

Silver said she continued twirling her purse and moving slowly back toward her car. The whole time, she said, the coyote moved with her.

“There was not a soul in sight and he never took his eyes off of my eyes,” she said.

Silver said the coyote stopped and she turned around and started walking to her car. When she looked back, the coyote was behind her and she resumed twirling her purse. The coyote later left and went to the ranger’s shack at the park entrance, Silver said, and she was able to get to her car.

“I was thankful because I didn’t know if I was going to make it out of there, ever,” she said. She added she has stopped her morning walk at Fort Hill.

“I feel he robbed me of my freedom; I’m a little bit wary of going back there. I’ve changed; I don’t go to the park as much,” Silver said. “I felt no one was taking it seriously. This was an aggressive coyote; he was watching me and I didn’t even know he was there.”