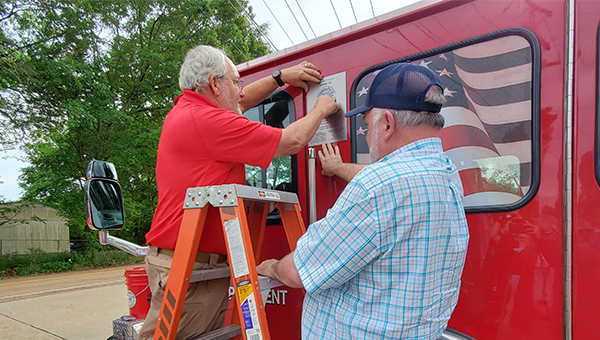 Longtime Culkin Volunteer firefighter Chuck Tate, left, places the plate dedicating the department’s Engine 205 on the driver’s side of the truck with help from Stacy Lay of Sunbelt Fire Apparatus of Foley, Ala. John Surratt

Tate honored with fire truck dedicated in his name

Whenever Engine 205 leaves the Culkin Volunteer Fire Department’s station on Freetown Road for a run, Chuck Tate will always be on board.

Friday afternoon, the Culkin volunteers honored Tate, who has been a member of the department for 35 years, including 16.5 years as chief, by dedicating the pumper to him. A plate dedicating the truck in his name was attached to the driver’s side of the truck’s cab.

The dedication was part of a ceremony honoring him and celebrating the return of the pumper, which was refurbished by Sunbelt Fire Apparatus in Fair Hope, Ala. The truck is one of two Culkin bought new in 2004. Its mate, Engine 204, is presently being refurbished at Sunbelt.

“He’s the face of Culkin, the backbone of what Culkin is and what we stand by. He’s the reason we have the trucks, and the station that we have is because of him. I credit a lot of my success to him,” Briggs said.

Being honored, Tate said, “Is amazing; there’s a lot of folks who deserve a little bit of that, too. To get picked out of that (group) is humbling.

“This way (as a firefighter), I’m paying back to the community,” he said.

Tate recalled the purchase of the trucks in 2004.

“It was one of those major projects we had at the time with the fire department and the fire district that allowed us to work very closely together to come up with the project that got us these trucks,” he said.

“When we did, there wasn’t anyone in the state who could believe that a volunteer fire department bought a custom fire truck, and then the fact that they bought two of them blew everybody away; it was a good plan.”

He said the purchase was done using fire district tax revenue and other funds.

“We looked at how to pay for it over time and went through state purchasing guidelines to see what we could do. We made it happen,” he said. “It was a plan, we knew where the money was, how long we had to work with it and we made it happen.”

But while the firefighters knew the trucks were a good investment, he said, they had to convince the residents in the district that it was time to upgrade from a commercial truck to a custom fire truck.

“When they found out what they could do with it, they were jumping on it. We love them (the trucks); they’ve done a good job for us,” he said.

While the refurbishing featured improvements to the pumper’s exterior, Briggs said, the major work is not immediately visible. Among the improvements, the truck’s transmission was overhauled, its wheel bearings, suspension, brakes and airlines were replaced and the primer for the truck’s pump was changed from manual to air.

Firetrucks, he said, are rated by the state’s Fire Insurance Rating Bureau for 20 years’ service. By refurbishing the trucks, he said, Culkin hopes to stretch that service life to 30 years.

“We believe that can happen with the maintenance the department has kept on the trucks,” he said.

Knowing the trucks would need periodic maintenance, Tate said the department in 2008 began putting aside $20,000 a year for major maintenance costs on the trucks.

“We got the bright idea to refurbish these trucks,” he said, adding Sunbelt had the facilities to do the work. “We planned for this in 2008 and tried to be good stewards. Fire trucks are not getting cheaper; we have saved the community a whole lot of money.”