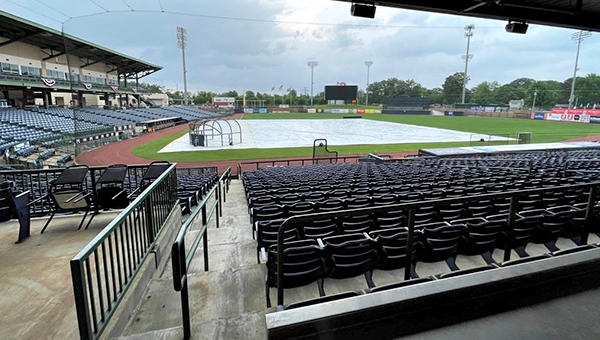 PEARL — It’s been 20 months since the Mississippi Braves have played a game, so what’s one more day to wait?

The line of severe weather that raced across Mississippi on Tuesday afternoon forced the M-Braves to postpone their home opener against Pensacola scheduled for the evening.

The storms caused damage in the Jackson area and rain continued in Pearl, the site of Trustmark Park, until late in the afternoon. The season opener was to have been the M-Braves’ first game since Sept. 2, 2019, after the entire 2020 Southern League season was canceled because of the COVID-19 pandemic.

Tuesday’s game will be made up as part of a doubleheader Thursday at Trustmark Park. The M-Braves and Blue Wahoos will play two seven-inning games beginning at 5:35 p.m. Gates will open at 4:35 p.m. Fans with tickets to Tuesday’s game are allowed to exchange them for any remaining regular-season home games at the Trustmark Park box office.

The first 1,000 fans at Thursday’s games will also receive a free pair of Mississippi Braves socks.

The M-Braves will now play their season opener against Pensacola on Wednesday at 6:35 p.m. There will be a pregame performance by The Jackson All-Stars Dixieland Jazz Band and the first 1,000 fans will receive a 2021 Magnetic Schedule. All first responders, military, veterans, and healthcare workers will receive a complimentary ticket.

The six-game series with Pensacola continues through Sunday. All weekday games start at 6:35 p.m. The Saturday game begins at 6:05 p.m., and Sunday’s game at 2:05 p.m.