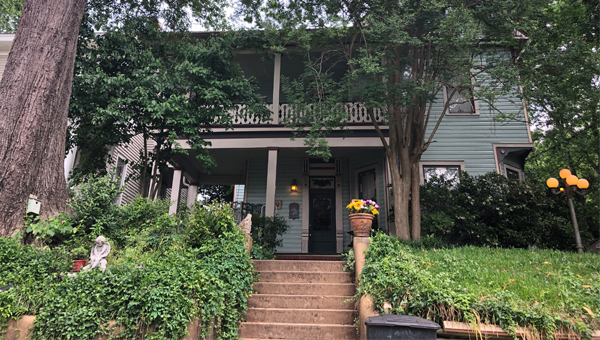 In April 1896, Crook sold a lot on the north side of Baum Street to William H. and Emma Jones.  They built a large Queen Anne house on the lot shortly thereafter.  The house to the right on the map, at 1317, was also built for Albert Arnold, also about 1896.  Jones was a druggist and owned Jones Drug Company.  Emma was active in the Speed Street School PTA, and the Cheery Workers’ Circle of Kings Daughters.

In 1903, the Jones hosted a dance birthday party at the house for their daughter, Luta.  In about 1914, N. Vick Robbins and his family moved from their house across Baum Street into the Jones house.  Robbins was a lawyer and served as district attorney for two terms.  He was an outstanding orator and was called on by various organizations to give speeches to local and visiting groups.  He was a member of the Kiwanis Club, the American Red Cross Vicksburg chapter, and was an alternate for Warren County for the 1920 Democratic Convention.  His wife, Mary, was active in a wide variety of organizations including the Vicksburg Civic League.

Apparently, the Robbins kept chickens because an article in the Vicksburg Evening Post in 1915 reported that “a thief entered the yard of N. Vick Robbins last night, and had opened a small coop and stolen two chickens and was preparing to break into a larger coop, when he was espied by Mr. Robbins, who took a shot at the thief.  The man dropped his stolen loot, and in a crouching position made his escape.”

Robbins was the county chairman for the establishment of the YMCA in 1917 and the chairman of the district that included Vicksburg in the centennial movement of the Methodist church in 1919.  The Post reported that Robbins stated that “the southern church is to raise 35 million dollars within five years and the northern church 80 million.  This money is to be used for various purposes, hospitals, and reclamation work in Italy, France, and Belgium, missionary work in Africa and other countries and home missions.”

Robbins, a great-grandson of the Reverend Newit Vick, died on September 7, 1936 of pneumonia at the age of 54.  Those surviving him were his wife, Mary Gwin, his daughter Amanda, and his sons, N. Vick, Jr. and Samuel Gwin.  Mary continued to live in the house into the late 1960s, she died in 1975.  Mary was joined in the house in 1954 by Virginia and Jan C. Van Tienhoven.  The Van Tienhovens had moved from St. Martinville, LA to Vicksburg in that year and Jan was a translator with the Waterways Experiment Station.  He died in 1980 and was buried in New Orleans.  Virginia continued to live in the house until she died in 1986 and was buried next to her husband.  The house is now owned by Mike and Karen Calnan.