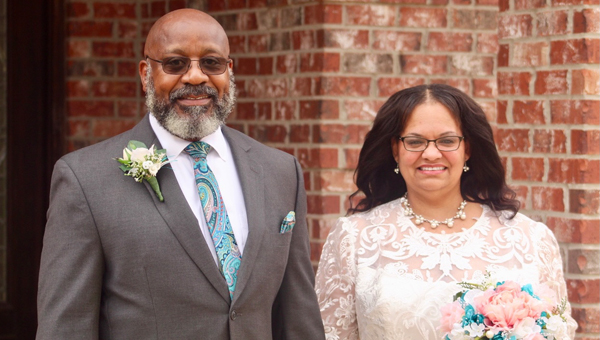 The bride is the daughter of the late Wade Elzie, Jr. and the late Margie Elzie Garrett.

The groom is the son of Hazel Lee Bell and the late Henry Bell.

The bride and groom entered the ceremony together to “When God Made You.”

August Washington, granddaughter of the groom, served as flower girl.

The groom is a 1976 graduate of Vicksburg High School and 1980 graduate of Alcorn State University where he majored in Industrial Arts Education. He retired from the U.S. Army in 2001 and retired as a Department of Defense Contractor in 2016.

The bride is a 1978 graduate of Vicksburg High School and a 1982 graduate of Alcorn State University where she majored in Secretarial Science. She received her Master of Educational Administration Degree from LeTourneau University in 2019. She is an International Baccalaureate Primary Years Program Coordinator and Magnet Montessori Specialist at East Texas Montessori Prep Academy in Longview, Texas.

An engagement brunch was held in honor of the bride and groom at the home of James and Valerie Bride of Rowlett, Texas.

The bride was honored with a surprise miscellaneous shower hosted by the Administrative Team at East Texas Montessori Prep Academy.