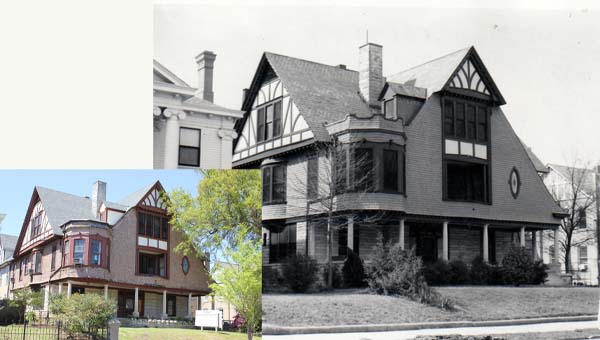 Looking back: The Adolph Rose House

This house at 1414 Cherry Street was a very modern one in design at the time when construction was started in 1901 by Adolph and Ophelia Rose. The Vicksburg Herald reported on July 1, 1901 that Rose was in possession of the plans and specs for his new house and was putting them out for bid. The article did not mention who drew the plans, but it may have been William Stanton as he had drawn up the plans for Rose’s dry goods building on Clay Street.

Rose hired Curphey and Mundy as his carpenters, John Beck to do the brickwork, and Kostner Cut Stone Company of Memphis to build the first floor of rusticated stone. Construction dragged on for over a year with the reason revealed in an article on October 16, 1902 in the Vicksburg American.

“The handsome new residence now under course of construction for Mr. Adolph Rose, is rapidly assuming completed proportions. This contract in charge of Curphey and Mundy, was started last winter and the foundation and largest part of the work on the two stories was up and completed when the carpenters’ strike went into effect last summer, at which time all work was dropped. The strike lasted something over two months and this residence, with others under course of construction, suffered during the time of the strike, as the carpenters and contractors were not the only representatives in the disagreement, but the plumbers, painters and all laboring people were temporarily at outs.

“The interior finishing of this beautiful home is now going ahead and when the carpenters and painters complete their labors and the available lawn is put in order, this will be another of the palatial homes which will bring Vicksburg into a greater prominence of modern architecture.”

The Rose family finally moved into the house in April 1903. Adolph Rose was born in Speyer on the Rhine in Bavaria, Germany.  Before moving to Vicksburg in 1884, he was a bank clerk in Bavaria. Once in Vicksburg, he worked in the mercantile trade for a couple of companies before joining forces with Victor Brown and establishing the Adolph Rose and Company.

Adolph Rose died on December 18, 1914 at his home on Cherry Street. His obituary detailed a legacy of leadership and service- vice president of the Board of Trade and the B. B. Club, a director of the Mississippi Home Insurance Company, finance chairman of the Mutual Loan and Building Association, president of City Savings Bank and Trust Company, and vice president of First National Bank.

He was survived by his wife, Ophelia, and three children- Alfred, Lester and Minnie. Ophelia continued to live in the house until the early 1920s. She was very involved in community projects including the American Red Cross and was treasurer of the Old Ladies Home. An article in the Vicksburg Post in 1914 read “After the morning and noon time of life comes the twilight. A twilight darkened by fears and cares, or made peaceful and bright by affectionate interest and thought. In the home of Old Ladies’, forty-five of these aged ones, in quiet and peace rejoice that they can spend their declining years free from poverty and want. Will not the generous hearted aid in keeping this home? It needs money, for the expenses are heavy.”

An appeal by the governing body of the Old Ladies Home in the Vicksburg Herald in March 1915 read: “so this appeal is made for the aged inmates of the Old Ladies Home, who depend upon the generosity of more fortunate for the comfort and peace that will make less gray and cold their “evening of life.’” Ophelia asked for all who could to pay yearly dues of $1 to join in order to help with the expenses of the home and its occupants. When she moved out of the house, it became the Business Girls’ Home with Mrs. Fontaine Tarry as the matron. By 1929, it was the Crawford Street Hospital Nurse’s Home and the name was shortly afterward changed to the Mercy Hospital Nurse’s Home and was such until the 1960s. Today it is owned by Crawford Street United Methodist Church.