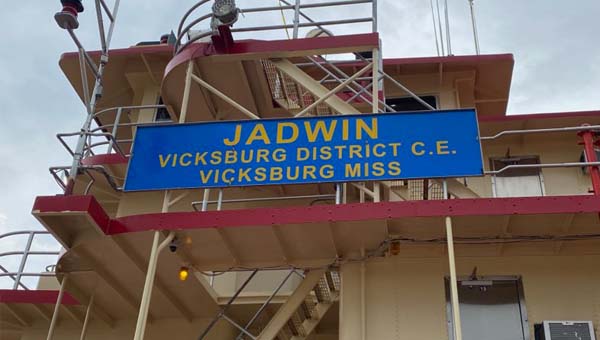 If one were to stand along the banks of the Mississippi River for just an hour or so, they would see how valuable that reliable navigation is to our nation’s economy.

Barges of grain, lumber, coal, soybeans, and other commodities float by all day pushed by towboats. An 88-year-old floating dustpan dredge the size of a football field helps to ensure that river barge traffic has a clear path to its next destination to deliver and receive goods.

On May 3, the Dredge Jadwin, with a crew of around 50 U.S. Army Corps of Engineers Vicksburg District team members, departed from the Vicksburg Harbor for its annual season of dredging along the Mississippi River and its tributaries.

Col. Robert Hilliard, Vicksburg District commander, and Patricia Hemphill, Vicksburg District Deputy District Engineer for Programs and Project Management, visited the Jadwin the morning of its departure to meet with crew members and speak with them about safety.

“I couldn’t be prouder and more appreciative of the hard work and dedication of the Jadwin crew,” said Hilliard. “Their safe return is what’s most important as they embark today.  People are at the heart of what matters most and when we take care of them, the mission will get accomplished.”

The Mississippi River has served as the lifeblood for our country throughout its development from an agrarian to an industrial society. People settled and built their farms along riverbanks. Cities grew up around farms, and eventually, industry made its way to where it could efficiently and economically ship and receive goods.

Even today, a host of industries and major cities spill out from the river’s edge, bolstering tourism and economies.

Dredges serve to clear sediment in rivers that falls out where the current slows. Locations with slower current are typically channel crossings and harbor entrances. The unique features of a dustpan dredge help it to clear a path, making channels passable.

Dustpan dredges have a dustpan-shaped appendage that lowers to a specific depth on the river bottom. The water jets agitate the sediment and the dustpan vacuums up the agitated material and pumps it through the dredge and pipeline, where it is typically placed in swift water and re-suspended as it continues its journey downriver. The material can also be placed in a deep location if the current is not strong enough to wash it downriver.

To dredge a specific location, the Jadwin uses two 5,000-foot cables that are crisscrossed and sunk by anchors weighing 6,000 pounds each.  The cables help the Jadwin maneuver while dredging.  Winches pull against anchors to advance. A dredge tender (towboat) is also used to assist in moving left and right.

There are only four dustpan dredges in the United States, and three of those, the Jadwin, Potter and Hurley, belong to the Corps of Engineers.  The fourth dredge is owned and operated by a private contractor.

The dredging season typically begins as soon as the spring water rise is over in April or May and ends sometime in November. In the off-season, dredges undergo critical repairs and maintenance.

Because of back-to-back years of high water and flooding, last year’s dredging season was record-setting at 247 days.

For more than 28 years now, Chuck Ashley has called the Dredge Jadwin his home-away-from-home. He started in 1994 as a deckhand and worked his way up to boat operator on a tender, to second mate, pilot trainee, assistant master and has served as the captain of the vessel for the past 3.5 years.

“There’s no other country like ours in the world,” Ashley said. “Strategically, the Mississippi River is a viable resource to the United States. If you buy fuel in Memphis, it likely came out of the Mississippi River. If you’re a farmer with grain, it travels on the river too.”

First mate Greg Busby has served on the Dredge Jadwin for more than 41 years now.

“I graduated from high school at 18 on a Friday, and the following Monday, my dad brought me to the Jadwin with his duffle bag he loaned me from his time in the military,” Busby said.  “I started working that day, and I’ve been here ever since.”

It’s obvious the Jadwin’s crew is dedicated to accomplishing the mission.

While much of the country began teleworking because of the pandemic, the crew of the Dredge Jadwin was on the river getting the job done.

The pandemic changed their work schedule last year from the normal 10 days on/5 off to 11 days on/4 off, so the crew could get tested twice a week for COVID.  The crew and vessel never stopped doing what it was built to do 88 years ago, providing essential navigation for our nation.

“I couldn’t imagine doing anything different than I’m doing right now,” said Ashley. “Everyone is like family, and I feel like I was raised by all the people who were here before me.”