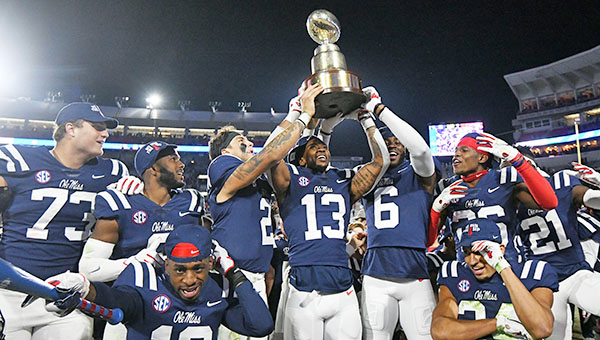 Ole Miss players celebrate with the Golden Egg following a 31-24 win over Mississippi State last season. Ole Miss and Mississippi State will renew their rivalry on Thanksgiving night in both 2021 and 2022, the Southeastern Conference announced Thursday. (Bruce Newman)

STARKVILLE — Mississippi’s college football fans will once again get to enjoy a little egg with their turkey.

The Southeastern Conference announced Thursday that the annual Egg Bowl rivalry game between Ole Miss and Mississippi State will once again be played on Thanksgiving night in both the 2021 and 2022 seasons.

This year’s meeting will mark the 24th time the teams have played each other on Thanksgiving. They did it three years in a row, from 2017-19.

The Bulldogs and Rebels have met 117 times previously and is the second-most played rivalry game in the SEC, with the first game taking place in 1901. The game is the 10th longest uninterrupted series in college football and has been played each year since 1944.