County crews to finish debris pick up from February… 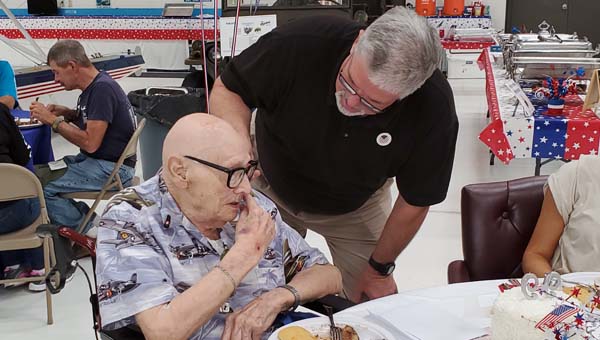 “We have an exhibit about Lamar (in the museum),” Southern Heritage Air Foundation Founder and Chairman Dan Fordice said. “We are so proud to honor him every day but especially so today on his 99th birthday. Lamar, thank you very much.”

There were also letters from the city of Vicksburg, the Warren County Board of Supervisors, a resolution from Hinds Community College, where Rodgers is an alumnus, and a proclamation from Mississippi Gov. Tate Reeves.

So is his story.

On Aug. 21, 1943, 21-year-old Sgt. Lamar Rodgers took his place in the top gun turret as the B-25 bomber “Worth Fighting For” approached the town of Salerno and headed for its target, the town’s railroad-marshaling yards.

As Worth Fighting For’s pilot guided it through the flak fired from antiaircraft guns, the plane was hit and its crew forced to bail out over water. Rodgers and his crewmembers were captured by German soldiers and spent the rest of World War II as prisoners of war — the last year at Stalag Luft 17B, a notorious prisoner of war camp in Austria.

By the time he and other POWs were liberated by men of the American 13th Armored Division, they had marched in the cold almost 300 miles from the camp to avoid Russian soldiers and Rodgers’ weight had dropped from 170 pounds to 114, the result of a daily diet of cabbage soup. He returned home to Yazoo City weighing 136.

After the war, he graduated from Hinds and returned to the Air Force, where he retired after 20 years.

“I flew for a while and then went to intelligence school,” he said of his return to the Air Force. “I enjoyed that. I was cross-trained in electronics. It was something I didn’t want to do; I didn’t understand it. I was miserable.”

Rodgers said when he joined the Air Force in World War II he never thought he would ever be honored like he was Wednesday.

“We had a job to do; we went and did it,” he said. “Some of us suffered for it, others didn’t make it. We volunteered to go. It was necessary.

“When I think about it, put it all together, I think, ‘How fortunate I am to have survived all these years.’ It’s just mind-boggling to think about it,” he said.