Once in a lifetime: Fleming’s century plants bloom 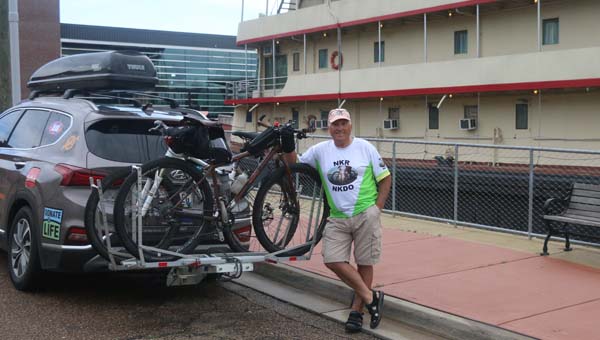 Mark Scotch during a stop in Vicksburg on The Organ Trail: A Kidney Donation Journey. The journey entails Scotch riding his bike from Madison, Wisconsin to Natchitoches, La. in an effort to make people aware that 13 people die every day in the U.S. waiting on a kidney and that if 10 of every 10,000 people would become living donors no one would ever have to wait on a kidney.

What do 1,500 miles, two men and a chance meeting all have in common? Making a difference.

Mark Scotch had made his way to Natchitoches, La. early in 2020. He was pitching a hops beer at a brewery and when the sales meeting was over, he struck up a conversation with Hugh Smith, who was sitting just a couple of bar stools down from Scotch.

The two men had never met but Scotch was immediately drawn to Smith.

“He was such an outgoing positive and happy person. He was just one of those people that are just really pleasant,” Scotch said.

The conversation lasted a good while. That was until Smith said he had to go.

Scotch was enjoying his company and tried to encourage him to visit a bit longer, but he couldn’t.

Smith had to leave for dialysis.

This stirred something in Scotch, and before Smith left the bar, Scotch told him if he needed a kidney he would give him one of his.

“I made my decision immediately,” Scotch said. “I didn’t even think about it.”

Scotch knew donating a kidney was something that could be done. His sister-in-law had donated one of her kidneys years earlier, he said.

On Sept. 30, Scotch had surgery and became a living kidney donor.

Scotch’s kidney, however, did not go to Smith. They weren’t a match, but through the aid of the “voucher donor” program, offered through the National Kidney Registry, a match was found for Scotch’s kidney and Smith, too, found a compatible kidney.

It is through this experience that Scotch decided to share his and Smith’s story and set out on The Organ Trail: A Kidney Donation Journey.

The journey entails Scotch riding his bike from Madison, Wisconsin to Natchitoches, La. in an effort to make people aware that 13 people die every day in the U.S. waiting on a kidney and that if 10 of every 10,000 people would become living donors no one would ever have to wait on a kidney. He also wanted to ride his bike 1,500 miles to prove you can still be active if you choose to be a living donor.

“I want people to be curious (about becoming a living donor). Check it out and educate yourself about the National Kidney Registry. Just do that,” he said. “I’m asking people to try to become as knowledgeable as they can and by doing that, everybody is going to know a little bit more and tell somebody else a little bit more.”

Scotch set out on his journey on April 24 and made his way to Vicksburg Tuesday. During his stop here, he said he camped at the Rivertown Rose Campground, ate at Rusty’s Riverfront Grill and enjoyed touring the River City on his bike.

Scotch’s wife Lynn is accompanying her husband on the Organ Trail by car.