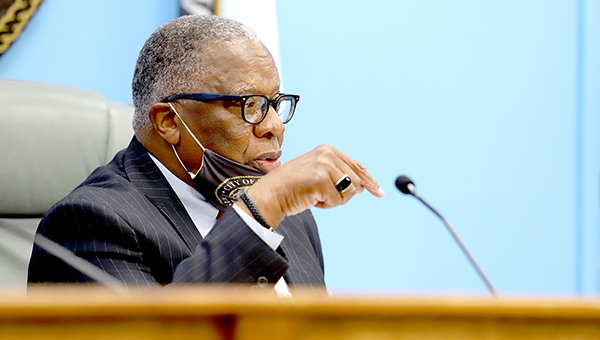 Vicksburg residents are no longer required to wear masks.

“Today, effective immediately, there is no longer a mandatory mask covering,” Mayor George Flaggs Jr. said Friday as he announced he was lifting most of the city’s emergency order approved by the Board of Mayor and Aldermen in March 2020.

He said it would be up to residents and local businesses to decide whether to continue wearing masks. Businesses and organizations, Flaggs said, must develop their own policies concerning masks and sanitation. He added residents who have not been vaccinated for COVID-19 are encouraged to wear masks and continue social distancing.

The mayor said two provisions of the emergency order remain in effect until June 7.

“The juvenile curfew from 7:30 at night and ending at 7:30 in the a.m. That is because we believe that it is in the best interest of the public to continue to go until we can get juveniles to understand they’re going to be juveniles,” he said.

Flaggs said the special law enforcement task force will continue operating from 7 p.m. to 7 a.m. Thursday through Sunday “until we are satisfied with the crime in this city we cannot delete that from our civil emergency order.”

Flaggs’ announcement closes the city’s response to the pandemic’s effect on the city. Part of that, he said, was the emergency order approved by the Board of Mayor and Aldermen in March 2020 containing what Flaggs called “some of the most restrictive covenants in an emergency order.

“The caseload was running rampant, the number of virus cases was running rampant, deaths were increasing and businesses were still open and we had to make a decision,” he said. “I think we were ahead of the curve. We think the decisions we made allowed us to be here today.

“The decisions we made allowed us to mitigate the spread of the disease and minimize the deaths and yet still unfortunately we still had many deaths and many cases. We made the best decision for the public. We put the public first,” Flaggs said.