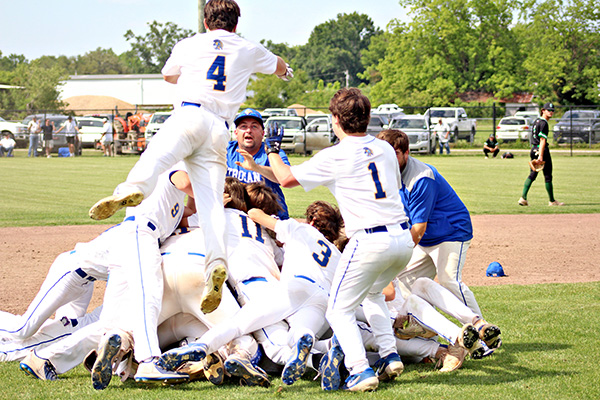 Tallulah Academy's Walker Sullivan (4) jumps onto his teammates to complete their dogpile after they beat Calhoun Academy 2-1 on Saturday to win the MAIS Class 1A baseball championship. (Ernest Bowker/The Vicksburg Post)

TALLULAH — As soon as the ball was hit, Walker Sullivan took off running and never looked back.

Oblivious to what was happening in the outfield, he rounded second and then third, all on his way to home plate. He didn’t stop running, in fact, until the final step launched him atop the dogpile his Tallulah Academy teammates had quickly amassed on the infield grass.

Sullivan scored the winning run all the way from first base on Todd Etheridge’s two-out double in the bottom of the seventh inning Saturday, giving Tallulah Academy a 2-1 victory over Calhoun Academy and its first-ever MAIS Class 1A baseball championship.

“We knew it was our year. In the beginning of the season we told each other there was nothing that would stop us,” said Sullivan, who went 2-for-3 with one RBI and one run scored. “We were down yesterday by two runs and we just nodded at each other and said if we’re going to win this whole thing we need to start hitting. We just got it done. It’s just the mentality in the dugout.”

Tallulah (26-1) swept Calhoun Academy (19-5) in the best-of-three championship series, and scored the winning run in the sixth inning or later in both games. The Trojans also capped off a remarkable season in which they won their last 25 games and finally broke through after reaching the Class 1A semifinals in 2018 and 2019.

Tallulah Academy opened in 1970, but did not start its baseball program until 1996. This is its first MAIS championship.

“We ended up short in football. It’s a good thing to finally finish a sport all the way through like it’s supposed to be done,” said Sullivan, a senior who also led Tallulah’s football team to the 2020 MAIS Class 1A championship game. The Trojans lost that one in November, but got to walk off winners in more ways than one in May. “It’s a good feeling. I’ll remember it for a long time. It’s my last sport. The last event for Tallulah Academy, so it’s a good way to end it.”

Tallulah won nearly half of its games this season via the mercy rule, but Saturday’s finale had enough drama to make up for it.

With the game tied 1-1 in the bottom of the seventh, Sullivan hit a one-out grounder to third base. Calhoun’s Connor McCormick skipped a low throw that teammate Jace Tutor was unable to handle, and Sullivan was safe on the error.

After the next batter popped out, the lineup flipped to the Trojans’ leadoff man Etheridge. He hit a high fly ball to right field that carried over the outstretched glove of Calhoun’s Noah Ozbun and fell for a hit just in front of the fence.

“He hung me a curveball the first pitch. I just threw the bat at it like I’ve been learning all year,” said Etheridge, who had two hits and reached base three times in the game. “I saw it hanging, I saw the spin of it. For a minute I thought it was gone. Then I saw where he was playing and really thought it would be an out, and it ended up dropping. It just shocked me that we just won the state championship.”

Sullivan, meanwhile, was running on contact and never looked at the actual play. He was halfway to third base when the ball hit the ground, and as Ozbun’s desperate throw to the infield went off course Sullivan scored without a play at the plate.

“Todd came up behind me, and there’s no better position to be in,” Sullivan said. “It was two outs. As soon as I hear that bat hit the ball, I don’t care where it’s hit, I’m rolling. I’ve got to get home. Todd hit it and I wasn’t looking back. I wasn’t stopping for anything, either.”

Tallulah’s party started as soon as Sullivan crossed home plate. By the time he ran the 90 or so feet back to his teammates he was the last one on top of the dogpile, as fans roared in the infield and truck horns blared from students parked behind the left field fence.

Many players hung around for nearly an hour after the game as well, savoring their last moments in the dugout and taking picture after picture with friends, family, and each other.

“We’ve struggled the past couple of years. We’d get to the semifinals and lose out every year. It really hurt us,” Etheridge said. “To get past that, we knew we had a really good chance this year, and it felt good.”

Even before the late-inning heroics, Saturday’s championship game had plenty of tension and drama.
Calhoun loaded the bases with one out in the top of the first inning, but only got one run out of it. Tallulah pitcher Dee Morgan hit Jake Wells with the bases loaded to bring in a run, then struck out the next two batters to escape the jam.

“One hit right there and you’re looking at 3-0. It’s huge,” Tallulah coach Kelvin Newton said. “Dee battled. That’s what we’ve been doing all year, is battling. We never give up.”

Morgan did not allow another run in five innings of work, and reliever Paul Michael Machen also pitched two scoreless innings. Tallulah, though, couldn’t get its own offense going. It left runners in scoring position in the first two innings, had a runner picked off third base to end the fourth, and another thrown out stealing to end the fifth. Calhoun pitcher Zane Ragon had five strikeouts in 6 2/3 innings.

Tallulah did catch one break, however, when Wyatt Bedgood scored on a single by Sullivan in the fourth inning. Calhoun catcher Seth Walker had to move a few steps up the third base line to grab the throw from the outfield, which took him into Bedgood’s path.

The two players collided just in front of home plate. Walker couldn’t hang on to the ball, and Bedgood climbed over him to touch the plate and tie the score at 1.

“If he would have been at home plate and we don’t slide and run into him, he’s out. But since he was up the line he has no room to slide, and therefore he doesn’t have to slide. And he dropped the ball, which is why he was safe,” Newton said.

The Trojans missed a couple of opportunities to take the lead in the fifth and sixth inning before Etheridge’s walk-off hit in the seventh made all of the early struggles a distant memory.

All along, though, they never panicked. It seemed just a matter of time until they put a rally together, and Newton said that was one of the true gifts — and lasting memories he’ll have — of the 2021 Trojans.

“It’s just the leadership of the seniors and sticking together. No matter if we were down, or made mistakes, we didn’t turn on one another. When you’re starting the process and end it like that, with a time like this, it’s just great,” Newton said. “It felt like it was our time. Even if we were down, it felt like we were going to pull it out in the end.”