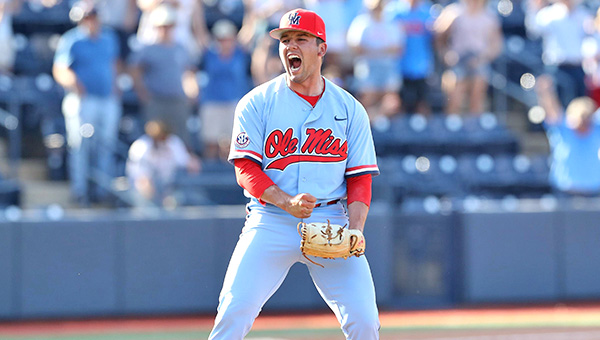 Ole Miss pitcher Taylor Broadway celebrates after getting the final out in a 13-10 win over Vanderbilt on Sunday. (Ole Miss Athletics)

OXFORD — Ole Miss has not had a lot of great baseball weekends the past couple of months, but they definitely walked away smiling from this one.

Cael Baker and Jacob Gonzalez both homered during a 10-run third inning, and the Rebels held on to beat No. 2 Vanderbilt 13-10 in the finale of a three-game series Sunday at Swayze Field.

Gonzalez went 3-for-3 with four RBIs and three runs scored for the Rebels. In addition to his two-run home run in the third inning, he hit an RBI single in the fifth and a solo homer in the eighth.

Baker also hit a three-run homer during the Rebels’ huge third-inning outburst. Nine consecutive batters reach base, and they had five hits and three walks in the inning. Gonzalez’s homer finished things, and made it 10-2.

Vanderbilt, though, did not go away quietly. An RBI single by Tate Kolwyck was followed by a grand slam by Carter Young to cut it to 10-7 in the top of the fourth inning.

Ole Miss pushed the lead back to 12-7 with single runs in the fifth and sixth innings, and then Kolwyck homered and Dominic Keegan hit an RBI double to get the Commodores back within three runs in the eighth.

Vanderbilt had one more chance in the ninth, after Isaiah Thomas hit an RBI double to make it 13-10, but Ole Miss reliever Taylor Broadway struck out the last two batters to end it.

Kolwyck finished 3-for-5 with two RBIs and three runs scored for Vanderbilt, and Keegan had three hits and two RBIs.

Hayden Dunhurst was 3-for-5 with a double, three RBIs and two runs scored for Ole Miss, and T.J. McCants had two hits and scored three runs.

Ole Miss will host Tennessee-Martin on Tuesday, and then finishes the regular season with a three-game SEC series at Georgia beginning Thursday night at 6.