Frazier: Storm cleanup is a lesson in patience 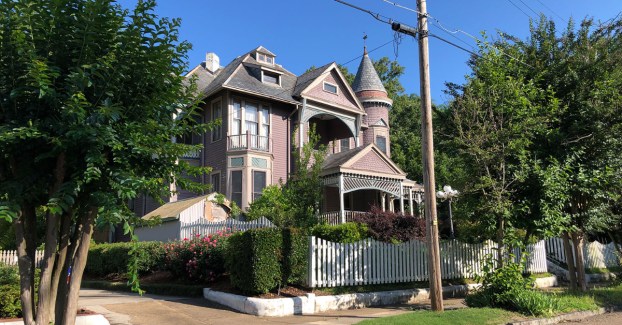 In April 1890, Oscar Mayer (yes really) sold E. Mack Lawrence a lot on Drummond Street for $1,829, on which he “will build himself an elegant home.”

Lawrence hired architect J. C. Carson to design the Queen Anne house, and it was built shortly after for $5,000, which was a lot of money for a house in 1890. It is Vicksburg’s largest and most ornamented Queen Anne, adorned with spacious verandas and balconies and decorated with turned spindles and latticework.

In October 1893, Lawrence bought the P. Keefe and Company Drugstore. He was, however, best known as a conductor on the railroad.  In 1895, he ran for the first of three times for the position of railroad commissioner. The New Orleans Picayune reported the following: “There is probably no one in the state of Mississippi better or more favorably known than the subject of this sketch. Captain E. Mack Lawrence. He was born at Clinton, Miss., a small town in Hinds County, on the 18th of December, 1848 (actually, his gravestone says 1850) and was schooled at the public schools of Warren County, Miss.

“The war breaking out, his school days were suddenly terminated, and being too young to go into active service, he became connected with the quartermaster’s department as a messenger boy, and in that capacity served until the evacuation of Vicksburg, indulging in the luxuries of eating horse flesh, rats and other blessings in disguise. Immediately after the war, he entered the service of the Vicksburg and Meridian Railroad, in the year 1865 as brakeman and baggage master, serving in that capacity about four years, when he was made conductor, and in that capacity, he served the public and railroad for over a quarter of a century and retired from the service on account of rheumatism unfitting him for active service.

“Captain Lawrence belongs to no societies with the exception of being one of the Order of Railway Conductors. He married a Miss Johnson, of Brandon, Miss., and has four living children that delight in bearing his name. Captain Lawrence is a prominent candidate for railroad commissioner.  Being a practible (sic) railroad man of thirty years’ experience, he could serve the people, if elected, with honor to himself and the state. Although 47 years of age, Captain Lawrence does not look a day over 30.  He is a fond parent, a good friend, and one that would scorn to do a mean thing.  And when elected commissioner, come weal or woe, Captain Lawrence will do his duty without fear or favor or the consequences thereof.”

He was not elected to the position, but in June of 1896, Lawrence was appointed the Southern Soliciting Freight Agent of the Monon Route in charge of Louisiana, Mississippi, Alabama and Arkansas. His office was in Memphis and the family moved there. They leased the house to Rev. Dr. George C. Harris of Madison County, an episcopal priest. When reporting that Harris was renting the house, the Daily Commercial Herald stated that “society may congratulate itself upon their acquisition.” The Lawrences were back in Vicksburg in about 1898, but were renting elsewhere for a while when the house was rented by Mr. F. S. Mordaunt. In July 1903, the Lawrences moved to El Paso, Texas, because Mack was sick and it was believed that the climate would help him. They leased the house to S. S. and Sara Bullis. Bullis was the president and general manager of the Vicksburg Railway and Light Company. In June 1906, Mr. and Mrs. Carl Fox leased the house and in February 1907, Dr. and Mrs. Oates rented half of the house.

By 1911, Charles and Josephine Miller called the house home. Miller had been the proprietor of C. J. Miller Wholesale Liquors prior to the enactment of prohibition by the State of Mississippi. He then became the manager of the Vicksburg and Delta Ferry Company and the Yazoo and Sunflower Transfer Company. In 1918, their daughter Alice and her husband, Tranquillin Guchereau also lived in the house, and he was the bookkeeper at Miller Auto Company and Delta Ferry Company.  By 1921, Miller and Guchereau were partners in the Miller-Guchereau Motor Truck Company.

As a side note, Mack and Laura Lawrence continued to visit Vicksburg on a regular basis. They outlived two of their children.  Warner died in El Paso in 1911 of Bright’s Disease at the age of 36, Mack, Jr. died in 1919 at the age of 34, also in El Paso.  Laura died in 1923, followed by Mack and daughter Ida in 1926.

We are so pleased that this picturesque and historic home has just recently been purchased and will be rehabilitated into a private residence. We can’t wait to see its transformation!