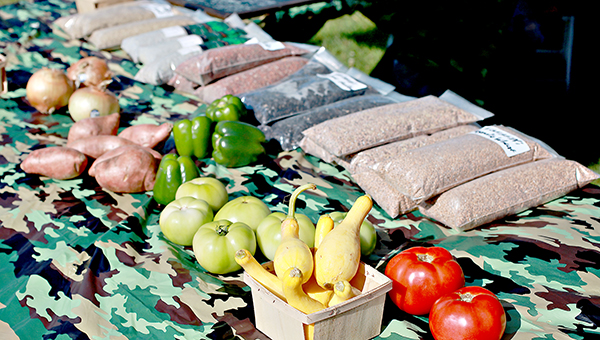 The annual Vicksburg’s Farmers’ Market in downtown Vicksburg. The market is located at the corner of Washington and Jackson Streets.

Some of my fondest memories heading into summer evolve around home-grown produce.

Early mornings waking up at my grandparents’ house, drowsily grabbing a bucket from the storage room and heading outside to pick blueberries in the cool of the day, while the dew-covered grass stuck to my bare feet. Three bushes produced regular blueberries, round and juicy and sweet, and one grew smaller wild blueberries, tart and deep indigo in color.

Once we’d each picked a bucketful — three or four gallons total — my Granny, Pawpaw, brother and I would head inside for breakfast.

It’s heartbreakingly amusing to me, the things that hold value in our hearts as we get older. My grandparents are long gone, but each summer I still join my family in a pilgrimage to their home, where we all join in picking bushels of blueberries, grown on the bushes my grandfather planted more than 20 years ago.

Throughout his life, even while working a full-time job at Whiting Field Air Force Base, my grandfather had a compulsion to cultivate the land. From cucumbers to squash to peas to watermelons, there was always something growing in the garden — and that garden was always immaculate. In retirement, he and my grandmother spent hours in the fields, harvesting the fruits of their labor, and then selling a portion of whatever they grew at their backyard farm stand.

A few modest, hand-painted signs went up by Florida Highway 87 to attract those heading south to the beach, and the offerings were plentiful.

My grandmother took particular pride in her tomatoes. From the smaller grape variety to the larger Big Boys, I remember rows and rows of red tomatoes lined up on their sun-bleached picnic table. It was my job to sit at the picnic table in the afternoons and count which ones had burst or gotten overripe. We’d throw those in a bucket, and toss them over the fence for the cows.

Perhaps the most labor-intensive thing my grandparents grew was purple-hull and zipper cream peas. Yet again, it was a family effort in the hottest part of the year, each of us grabbing a five-gallon bucket and being assigned a few rows. My brother and I would try to race to the end of each row, seeing who could pick the most peas, but our grandmother almost always won. I can still see her bent over rows of peas in her work shirt and straw hat, working as hard as any man.

However, the real fun began in the evenings, when we’d all gather around on the back porch and swap stories while shelling the peas. We fell into a rhythmic pattern: hook the top of the hull between your thumb and forefinger, pull it down to open the hull, let the peas fall free into the bowl, discard the hull and check for bugs or stings on the peas.

Throughout my childhood and adolescence, there were many Friday nights when I chose to stay home and shell peas. The sound of chatter over the soft plunk of peas landing in the bowl still rings clear.

As the Vicksburg Farmers Market returns, think of the commitment that goes into harvesting every bushel basket, the labor behind every jar of preserves. If the vendors there are anything like the farmers I grew up with, there is love in everything, down to the last sprout.