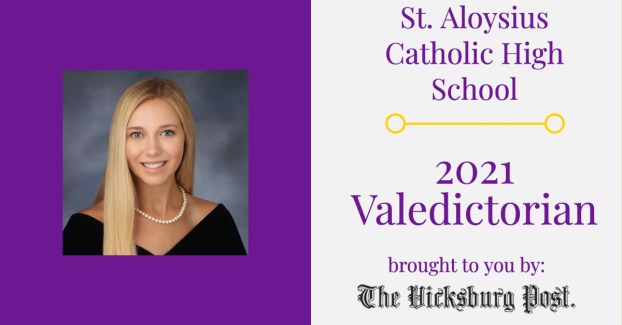 The only goal set was to do her best, and in doing so, Logan Young was named the valedictorian for the 2021 class at St. Aloysius Catholic High School.

Young, who is also a STAR student, said her accomplishments were never borne out of external challenges, but an internal challenge she had made for herself.

“I’ve always done my best to do what I knew I was capable of and tried my best not to compare or make it a competition in any way,” she said.

Young is the daughter of Gary Young and Melissa Osburn.

In addition to succeeding academically, Young is also a leader.

She served as vice president of the National Honor Society, was the secretary for Mu Alpha Theta, was part of the Chick-Fil-A Leadership Academy and was the chaplain for the Vicksburg Cotillion Club.

Young was also a member of the Key Club, Interact Club and Fellowship of Christian Athletes while also participating on the Mentoring Team, Math and Science Team and Quiz Bowl.

It was her family whom Young credited for her academic achievements.

“I owe my parents so much for my success so far. They’ve always encouraged me to be curious, always answering whatever ridiculous questions I had,” she said. “They taught me to work hard for what I want but more importantly that it’s not the awards that really matter but your character.”

The St. Aloysius graduation ceremony was held on May 29, and 35 graduates received diplomas.

For her valedictorian speech, Young said, after thanking the teachers and staff, she spoke about some of the fondest times the class of 2021 had shared and encouraged her fellow graduates to always be true to themselves.

“I first thanked the faculty of St. Aloysius for their hard work,” Young said. “Then, I addressed my class. I reminded them of some of our best memories and tried my best to convince them to stay strong in who they are as we leave each other for whatever the future holds.”