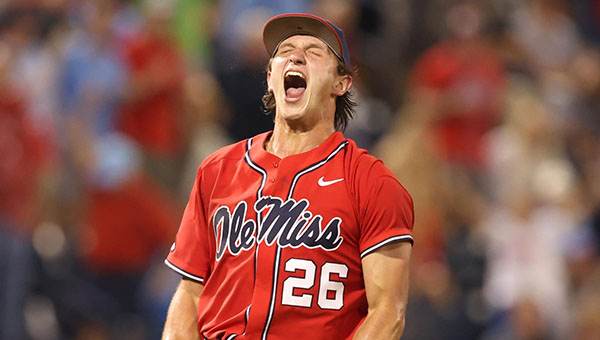 OXFORD — It took a masterful performance from Doug Nikhazy, a little luck and a little help, but No. 1 seed Ole Miss took full command of the Oxford Regional.

Ole Miss (43-19) only needs to win one of two games against either Florida State (31-23) or Southern Miss (38-20) to advance to the super regional round of the NCAA Tournament.

Florida State and Southern Miss will play an elimination game Sunday at 1 p.m, with the winner moving on to play Ole Miss at 5 p.m. If Ole Miss loses the second game Sunday, the regional championship game will be Monday at 6 p.m.

Nikhazy surrendered a pair of home runs in the fifth inning Saturday, a solo homer to Isaiah Perry and a two-run shot to Logan Lacey that put Florida State ahead 3-2.

Ole Miss only had four hits in the game, but scored all four of its runs on FSU errors. Kevin Graham broguht two home when he hit a grounder through the legs of Florida State second baseman Jackson Greene.

In the seventh Elko hit a two-out grounder to shortstop Nander De Sedas, who sailed a throw over the first baseman’s head to allow two more runs to score.

“It was one of those games that comes down to a couple of plays, and we were able to just make a couple more plays than them,” Ole Miss head coach Mike Bianco said.

De Sadas’ error gave Ole Miss a 4-3 lead and it stayed that way the rest of the game. Nikhazy (10-2) struck out the side in the bottom of the seventh to tie the school’s single-game record for strikeouts.

Nikhazy became the fourth Rebel with 16 strikeouts in a game, and first since Drew Pomeranz in 2009. Robert Earl Siedell (1962) and Jamey Price (1995) also hit the mark.

“He’s pitched a ton of big games. I’m not going to go out on a limb and pick which one (was best). But certainly we needed every bit of Doug today,” Bianco said.

Closer Taylor Broadway took the baton from there. He retired all six batters he faced, and struck out the side in the ninth, to earn his 15th save of the season.