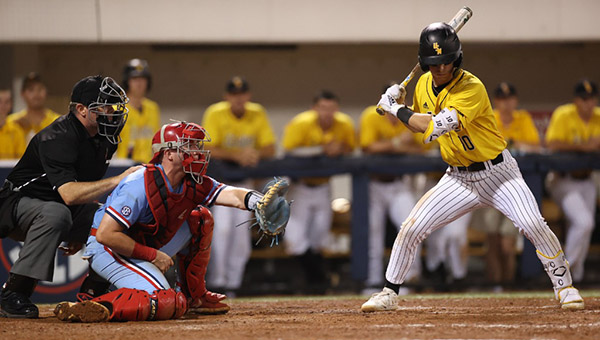 OXFORD — Twice on Sunday, Southern Miss dug itself a hole that seemed almost too deep to climb out of.

Twice, the Golden Eagles not only found a way out but buried the people who put them there.

Southern Miss rallied from deficits of three and four runs to win a pair of elimination games at the NCAA Tournament’s Oxford Regional, first by beating Florida State 7-4 and then by knocking off top-seeded Ole Miss 10-7.

The two victories sent Southern Miss (40-20) into a winner-take-all showdown with Ole Miss (43-20) Monday at noon, with a trip to the super regional round on the line.

“Coming in, obviously we wanted to win the regional in three games. Once you lose one, you have to win four,” said Southern Miss center fielder Reed Trimble, who had four hits and five RBIs in the two games Sunday. “So it just started off as one win at a time until we can gt up to No. 4. We’ve got three in a row now and just need one more. The message is ‘one more.’”

Southern Miss’ first comeback came in the afternoon against Florida State. Logan Lacey homered and Robby Martin hit a pair of RBI singles to stake the Seminoles to a 4-1 lead through four innings.

Blake Johnson hit a two-run home run in the fifth, however, and Will McGillis a solo shot in the seventh to tie it at 4. An RBI single by Reece Ewing in the eighth gave Southern Miss the lead, and they tacked on one more run in the eighth and one in the ninth for insurance.

Ryan Och pitched 4 2/3 innings of scoreless relief to earn the win for Southern Miss. He allowed one hit and two walks, and struck out 11.

“The storyline was Ryan Och being able to cover what he did, and basically dominate the Florida State hitters. That’s not an easy lineup to do that with,” Southern Miss coach Scott Berry said.

The afternoon victory sent Southern Miss into another elimination game in the evening against Ole Miss, and it could not have started worse for the Golden Eagles. Freshman pitcher Blake Wehunt hit two batters and walked two before being pulled in the first inning, and a two-run double by Hayden Dunhurst gave Ole Miss a 4-0 lead.

“We were just going to try and chip away. We knew our offense has been playing well lately, so there was no panic in the dugout at all. We just knew we had to have good ABs, and with good ABs would come runs eventually,” McGillis said.

Southern Miss did more than chip away. It sent 12 batters to the plate in the bottom of the first and scored seven runs, with three of them coming across on a two-run home run and an RBI single by Trimble.

Ole Miss got a run back in the second inning on a solo home run by Peyton Chatagnier, but it never led after the top of the first. McGillis hit a two-run homer in the bottom of the second, and Tanner Hall turned in a masterful performance out of the bullpen to shut the Rebels down after the fast start.

“We get to a four-run lead and the stadium’s rocking and we’re feeling good,” Ole Miss coach Mike Bianco said. “Man, were they (USM) on fire today offensively, especially the first couple of innings. It seemed like whatever we threw, they were on. At the end of the day, it’s one of those where we just ran into a buzzsaw early.”

Hall pitched five innings without allowed a run. He walked one batter, struck out five, and only allowed one hit.

“Another star was born, and that was Tanner Hall on the mound,” Berry said. “He hadn’t pitched a lot lately. He threw a lot for us early in the year, maybe too much, we wore him down a little bit. But he’s back strong and he showed that tonight.”