Star Spangled Night Run returns to usher in the… 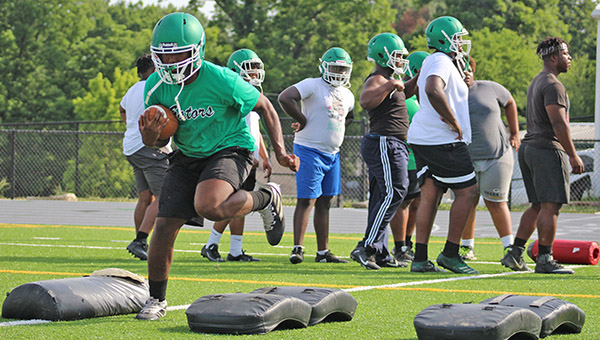 Summer vacation for Vicksburg High’s football team was short-lived. In fact, it didn’t even include any of summer.

The Gators returned to the practice field for summer workouts bright and early on June 1, just as the sun was beginning to peek above the horizon and only a couple of weeks removed from their spring jamboree. It was the first of 30 workouts that will continue through the end of July, when the team will have a few days off before beginning preseason camp.

“It’s pretty much been the schedule for the past 20 years since I’ve been dealing with football,” McDaniel said. “They had two weeks, maybe three weeks, off since the spring game, and they’re ready to get back to it. It’s time to get back in the weight room and time to get on the field. We had a great spring, but we want an awesome summer.”

The Gators had a mediocre fall in 2020, finishing 4-8 with a first-round playoff loss to Grenada, but did indeed have a great spring. They defeated Wingfield 20-0 and Port Gibson 30-8 in the spring jamboree on May 13.

The spring success and a year to get players and coaches familiarized with each other has made this summer a chance to take a step forward, McDaniel said. The team did not have a spring practice period in 2020 because of the COVID-19 pandemic, and did not begin summer workouts until mid-June.

“This summer is definitely a building block for us,” McDaniel said. “We’re going to add a few new things here and there. We definitely understand the foundation, so we’re going to be able to add wrinkles. As the summer goes on and the season goes on, we’ll add wrinkles every week.”

McDaniel added that the 2021 Gators already seem to have a different vibe than the 2020 edition. More than a dozen freshmen and sophomores saw significant playing time last year and are stepping into more prominent leadership roles as second-year starters. Their attitude, McDaniel said, is starting to drive a change in the program’s culture.

“This team has a totally different mindset than the one last year,” McDaniel said. “I honestly didn’t know who really wanted to play last year. But these guys here, you can tell that they’re more friendly toward each other and this is more of a family and team atmosphere. Those guys work very well together.”

Vicksburg’s summer schedule includes four practices a week, Monday through Thursday mornings at 7:30 a.m., concluding on July 28. There is a dead week with no practice July 5-9, and every Tuesday in June the team will get on the bus and go to Jackson to play in the 7-on-7 Jackson Passing League at Hughes Field.

All of the state’s 7-on-7 leagues were shut down in 2020 because of the pandemic. McDaniel said getting back to playing in the Jackson league should help his skill players and secondary, as well as offer a break from the monotony of the daily summer workouts.

The season opener is Aug. 27 against Germantown in the Red Carpet Bowl.

“It gives the kids an opportunity to go out and have fun, and compete against other kids, and to be able to get our schemes together on the offensive and defensive side of the ball,” McDaniel said.

“It’s always good to see a different color. You come out here and we have 31 or 32 days, and it’s a grind when you have to do the same thing every day,” McDaniel added. “You want to change it up and keep them excited. Being able to go to Jackson and play 7-on-7 on Tuesdays was another thing we were able to do this summer.”