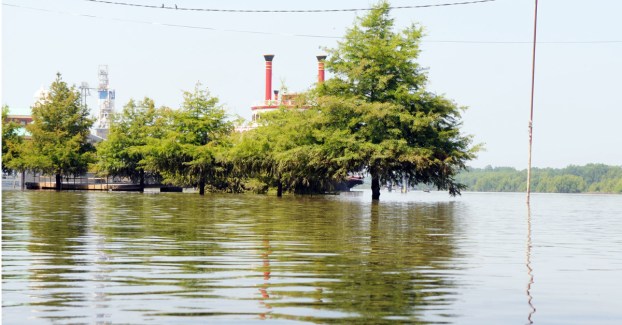 Vicksburg City Front remains under floodwaters two weeks after the crest was reached at Vicksburg at the historic level of 57.1 feet. (Katie Carter/The Vicksburg Post)

The Mississippi River at Vicksburg had already crested, on the last day of March in 2011, and most of the non-water watchers had no idea what would come in the following weeks.

The intrepid staff of The Vicksburg Post kept an open line with the U.S. Army Corps of Engineers and learned early in April that “we ain’t seen nothing yet.”

We immediately compiled reflections of the 1973 flood — thus far the record-holder for the giant river’s spread — and tried to map out where the water would go this time, if it climbed as high as forecasters predicted.

We knew Ford Subdivision, Kings, Waltersville and Mississippi 465, to the north, and low-lying U.S. 61 and LeTourneau Road, to the south, would take on water. We’d not planned, however, on all of Eagle Lake being swamped in, with residents having to stay put in their homes or drive hours to get to the city or, to the south, homes in Green Meadow Subdivision and Ring and Glass roads being overtaken by the brown liquid that was so beautiful when the Mississippi stayed in its banks.

In the six weeks that followed the first crest in late March, thousands of acres of farmland were underwater and about 4,800 people were displaced in The Vicksburg Post circulation area — Warren, Claiborne, Issaquena and Sharkey counties.

Our young, talented photographers, David Jackson and Katie Carter, were working daily from sun-up to sun-down documenting the destruction, the heartache, the misery. Reporters were in the office on the phones, in the field conducting face-to-face interviews and in the archives drawing comparisons and contrasts wherever possible.

Then came the out-of-towners.

Visitors from across Mississippi and neighboring states drove to Vicksburg in droves in mid-May when the river climbed higher than it had in recorded history; they lined up along Washington Street overlooking the Old Levee Street Depot, where coffee-colored water from the Yazoo River Diversion Canal climbed with almost lightning speed as the Mighty Mississippi rose higher and higher.

Officials at the Mississippi Welcome Center recorded 600 to 700 visitors in one weekend, the majority of them river sightseers. One of those, from Calhoun, La., was quoted as saying: “We had to come because this is history in the making.”

Our young Post journalists were a bit star-struck, but quickly snapped out of being enamored when they were reminded this flood is in “our backyard” and it’s our chance to beat the well-knowns at their own game.

Finally, The Vicksburg Post — including all departments — could print and distribute a daily newspaper that didn’t include “flood” in a Page 1 headline.

And though, in hindsight, we all can see where we could have done better, the employees of The Vicksburg Post had the chance to look back and feel pride for the job we’d done, even in unchartered waters … and competing with the “big boys.”

Karen Gamble was managing editor of The Vicksburg Post during the 2011 flood.