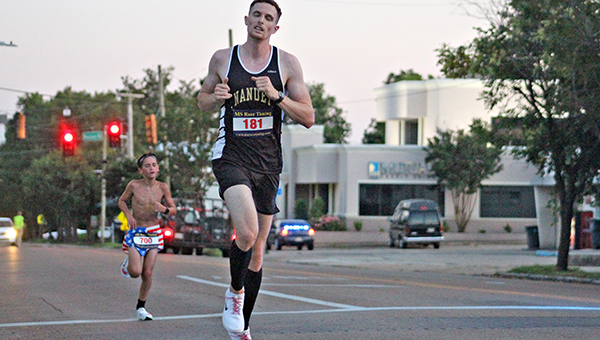 Andrew Klock (181) runs just ahead of Evan Hallford (700) near the end of the Star Spangled Night Run 5K Saturday in downtown Vicksburg. Klock beat Hallford by nine seconds to win the race for the second year in a row. (Ernest Bowker/The Vicksburg Post)

While chasing down a challenger half his age, Andrew Klock didn’t rely on experience or wisdom to carry him to victory.

Klock kicked his long legs into gear over the last quarter-mile to catch and pass Evan Hallford, and outsprinted the 13-year-old to the finish line to win the Star Spangled Night Run 5K for the second year in a row on Saturday.

“It was all him for 90, 95 percent of the way. I was just following his lead. Then on that last straightaway, the last 400 meters, honestly it just came down to the height. I’ve got about 14 inches on him,” said Klock, who is about 6-foot-3 while Hallford is about 5 feet tall. “I told him he’s going to grow a little taller and get a little faster and his time is going to drop.”

Klock won the Star Spangled Night Run by more than two minutes last year, but had to work a lot harder this time. Hallford got out to an early lead and kept it most of the way as Klock allowed the teenager from Philadelphia to set the pace.

Klock eventually reeled in Hallford in the final mile and blew past him on the homestretch. Hallford gave a spirited effort, encouraged by both Klock and a Vicksburg police officer riding alongside him on a motorcycle to keep up the pace, but wasn’t able to catch up.

“I was letting him pace me for sure. I haven’t raced since January, so he really took the lead and I followed him most of the way,” Klock said. “When I started seeing the finish line turn I said, ‘This is it, I don’t have any more time.’ That’s when I kicked into that last gear.”

Hallford said the hills in the course through downtown Vicksburg took some of the wind out of his sails.

“I was trying to pace it because a lot of people had told me there were a lot of hills, so I think I went a little too hard in the first mile because of the big old hills. They’re hard to get a hold of,” said Hallford, an eighth-grader who runs for Neshoba Central High School’s cross country team. “I felt good going through the rest because it was all flat, then at the end it got a little bit hillier and when I got to the last mile I was checking it constantly on my watch to see where I was.”

Samuel Terrett finished third out of the 75 runners competing, well back of the two frontrunners with a time of 21:51. Walter Hallberg and Darius Youngblood rounded out the top five, while Laura Jimenez finished sixth overall to claim the women’s championship.

Jimenez, a 31-year-old native of Mexico who has lived in Vicksburg for 13 years, posted a time of 22:45 to easily defeat women’s runner-up Samantha Edwards. Edwards was 41 seconds back, with a time of 23:26, and finished eighth overall. 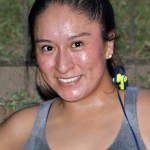 Kelsey Fall was just behind Edwards in 23:28, and Hollie Cook was fourth among the women and 10th overall in 23:45.

“It feels great. That was my goal when I was training at the park. I was hoping to win first place,” Jimenez said. “I took advantage of the downhills. That’s what I like to run. Downhills fast, and uphills just keep the pace.”

In the 5K race walk, Ron Roma squeaked past frequent rival Steve Pranger in a battle of 60-somethings. The 67-year-old Roma posted a time of 32:40, while the 61-year-old Pranger was five seconds behind. 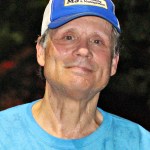 Roma finished ahead of Pranger on the course, but had to wait out some anxious moments before he could celebrate. Pranger started the race a few moments after Roma, and because time is kept through computer chips there was some uncertainty at the finish whether Roma had actually posted a better time or just finished first because of his head start.

Roma said he was especially pleased with his winning time on a humid night in downtown Vicksburg. 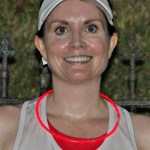 “It’s always good to do well. At my age, when you turn that kind of time it’s always an accomplishment,” he said. “I’m 67 years old. When you can do this under 34, 33 minutes you’ve done a good thing.”

Lucy Priddy finished third overall in the 5K walk to win the women’s championship — or any race she’s entered — for the first time. She finished in 34:40, a comfortable 30 seconds ahead of Elizabeth Joyner.

“I started to feel it about halfway up the second hill. But after the second hill everything really settled out. That’s the fastest time I’ve ever had,” Priddy said. “Total surprise. Not surprise that I finished, but that I won first place in the women’s.”