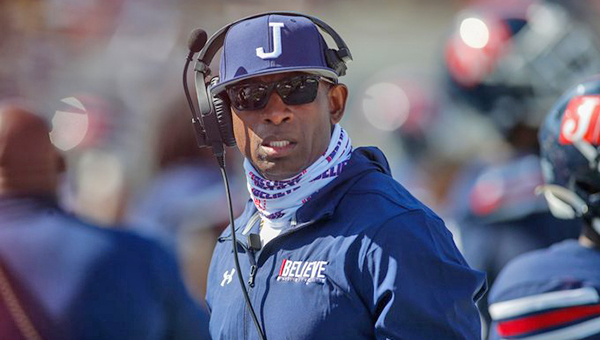 Jackson State coach Deion Sanders walked out of the Southwestern Athletic Conference’s football media day after a reporter twice called him by his first name.

During a video conference call with reporters on Tuesday, Clarion-Ledger reporter Nick Suss started a question by saying, “Hey Deion,” when he was abruptly cut off by Sanders.

“Hold on, let’s back up a little bit. You don’t call Nick Saban, ‘Nick.’ Don’t call me Deion,” Sanders said.

Suss objected, saying he had interviewed Saban and called him “Nick,” to which Sanders again objected.

“That’s a lie. If you call Nick, Nick, you’ll get cussed out on the spot, so don’t do that to me,” Sanders said, grinning and laughing slightly. “Treat me like Nick.”

Suss started his question again by saying, “OK, Deion,” and Sanders walked out.

Suss also covered Sanders during the SWAC’s media day before its spring season began in January.

“When I interview people, I call them by their first name,” Suss told the Clarion-Ledger. “Whether it’s someone I’ve been working with for years or someone I’m talking to for the first time. This is true of the coaches and players on the Ole Miss beat, the coaches and players at Mississippi State and Southern Miss when I help out covering their teams and, as recently as January, even Sanders, too.”

On Tuesday night, Sanders took to Twitter to deny that he had walked out of the press conference.

“Never walked out of media day. I prolonged my time to answer another question & the person thought it was cute to address me the way he did so I dropped the call & went to the next outlet,” Sanders wrote. “Please don’t allow a fool to fool u because then nobody would truly know who the fool is.”

A later tweet by Sanders included video of the exchange between he and Suss, which lasted about 30 seconds. The video was punctuated by a rap song starting as Sanders walked away from the interview, and finished with 30 seconds of clips of Sanders dancing.

“This is how all of this started,” Sanders wrote in the tweet that accompanied the video. “I really Pray for all of us because this was something so minimal that was hilarious to me that you allowed a FOOLISH media outlet and person to play on your Preconceived notions. I’m all about Peace,Love,Work,Commitment,Sacrifice & Forgiveness.”